Faig Ahmed dismantles and reforms Azerbaijani traditions of carpet making, creating remarkable new works of contemporary art. Through his art practice he reconsiders these ancient crafts and their history by deconstructing both their physical form and their traditions, and questions the conventions associated with their craft by repositioning them in the contemporary art environment. From these ancient objects he creates new visual forms which challenge the role of iconic cultural objects in representing nations, traditions and history. The cultural significance of carpet weaving in Azerbaijan is reaffirmed by Ahmed’s practice who sees cultural history as a monolithic subject by which we establish our perspectives and visual vocabulary today but also something which is important to question and challenge.

Azerbaijani carpets are often extraordinary and intricate creations with examples dating back as far back as the 2nd millennium BC. They are made up of range of “schools” defined by their geographic origins and type of pattern. Their construction demands an exceptional level of skill. Ahmed has both manipulated original carpets – un-weaving them and using digital technology to redesign and reconstruct them – and also employed those equipped with the ancient skills to weave completely new carpets. Finding traditional weavers to craft his designs has proved difficult due to the sacred nature of the craft but eventually he found those who would be willing to work for him, although notably done in secret. 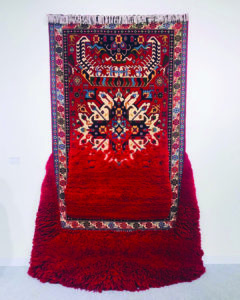 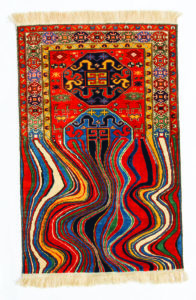 Through these methods Ahmed questions the role of truth in these carpets and whether in a deconstructed form they can they still carry the same significance and power as they did when objects of antiquity. His work shows how artworks can be contemporary but still retain a sense of an ancient aura. They are a unique collision of traditional crafts, steeped in history and digitally distorted and pixelated images. In his work ‘Oiling’ (2012) his hand-woven carpet gives the sensation that the coloured strands of the rug are melting, like the reflective pattern of oil in water. This sensation resonates with Ahmed’s home city, Azerbaijan’s capital Baku, and its own history of early oil drilling and the geopolitics around oil that would follow.

The elevation of these carpets into complex objects of art, hanging in a gallery environment, highlights their journey from their original function as a domestic feature – to be walked over – and how, through the role of antiquity and now as contemporary art objects, they have changed into cultural objects that are exhibited and capable of holding multiple meanings. This transformation from functional to iconic is highlighted by their manipulation into abstracted and digitally fluent forms with echoes of contemporary internet art. These digital manipulations express a three- dimensionality that re-activates and invigorates them. They draw the viewer in; as at first glance the skilful weaving of coloured strands appear as pixels seen at close range or a digital glitch.

There is a strange moral tension in this process of using an object, firstly of function, yet which has become renowned as a historic artefact and transforming it into a contemporary art object for exhibition. Ahmed seeks out carpets aged around 100 years old or more, using his own supplier to acquire theses cultural icons. He has reflected on the morality of this process – attempting to remain detached from their historic weight and tradition simply seeing it as another part of history – and another material or medium for an artist to manipulate. However, he has struggled to always maintain this distance; on one occasion he was using a carpet from the Karabakh school, developed in lowland and mountainous parts of the Karabakh region. Ahmed reflected on the issues of tradition and its intersection with nationality and sovereignty with this particular carpet. The Karabakh region is occupied by Armenia and the carpet came from a woman who cannot return there. This relationship between the icon and the displacement of its owner caused Ahmed to be unable to cut and appropriate the carpet, describing himself as ‘a hostage to tradition’. Unable to unravel the carpet himself he used an art production company to do so. This gave Ahmed the realisation that despite his best efforts it was not always possible to remain impersonal to tradition and its presence can be felt directly and personally. In turn this has given him a sense of responsibility and morality in how he makes his work. The reuse and negotiation of tradition through careful and considered manipulation can contribute a new truth to the works and retain or reaffirm the power present in the carpet.

In some of his most recent work Ahmed has begun to question the potential of the carpet as not just part of a singular culture but a wider transcendental visual experience. Travelling deep into the Amazon rainforest he has visited the Shipibo- Conibo people to study their carpet making. While carpets from cultures around the world may share some similar patterns, the Shipibo’s carpets are highly unusual as their designs are devised from shamanic visions produced by consuming the hallucinogenic herb ayahuasca. For Ahmed, this approach to carpet making offers a natural continuation of the abstracted reimagining of the Azerbaijani schools moving towards a more cosmic or universal language of pattern. The influence of this research can be seen in recent work such as In Liberation I (2018), which includes three psychedelic designs inspired by the Shipibo-Conibo where pieces disintegrate into a plume of red strands. In this work we have the sense that Ahmed carpets are becoming more alive than ever, almost organically growing these new forms out of the old carpets material. A constant rebirth from the old artefact.