Arrest, prison, GULag, suffering, and death – all are images that come to mind when we think of the Stalin era Great Purges of the 1930s. Solzhenitsyn’s GULag Archipelago and the memoirs of survivors document this period of a government’s war against its own people in heart-wrenching detail. It was a war fought so successfully that the government had to withdraw the Soviet census of 1937 to cover up the obvious loss of life by unnatural means.

Along with tragedy, the Great Purges produced some improbable stories of survival. One of the most improbable of these is the case of Alexander Ivanovich Postoiev , astronomer and one-time director of the Tashkent Astronomical Observatory who would go on to long career in Brazil.

Born on 26 February 1900 in the village of Osovets, in what is now Ukraine, Postoiev joined his life to the stars when his father woke him one night to see the Great Comet of 1910. Friends recount how the memory of that night sustained Postoiev through the calamitous decades to come.

Postoiev entered Kharkov University in 1917, but the Civil War cut short his studies. In the 1920s he resumed his education at Leningrad State University and continued with graduate study at the Leningrad Astronomical Institute.

In 1928 Postoiev joined the staff of the Tashkent Astronomical Observatory (TAO). The observatory had come into existence in 1873 as part of the Turkestan Military Topographic Department. The Russian Empire’s new conquests in Central Asia had not yet been mapped in detail, and the Russian military needed trained geodesists to carry out this work.

Postoiev rose quickly to become assistant director in 1930 and director in 1935. In 1936 he was elected a member of the International Astronomical Union (IAU).

When the Great Purges unfolded, along with the first show trials in 1936, astronomy was not exempt. More than two dozen astronomers were arrested in 1936-37, some 20 percent of all astronomers working in the Soviet Union at that time. The arrests centered on Pulkovo Observatory and the Leningrad Astronomical Institute, but the Purges also fell hard on Tashkent. Out of nine astronomers on the TAO staff in 1935, six vanished without explanation in 1936. 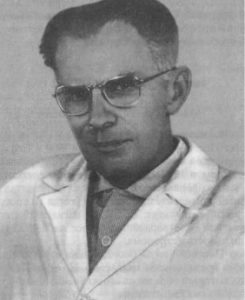 Postoiev was one of the first to be arrested. It happened in February 1936 while he was on a trip to Leningrad. Handed a five-year sentence, he spent one year in prison before being sent to a camp in Vorkuta. There he was lucky to serve as head of a meteorological station rather than being sent to hard labor, and this luck led to his early release in 1939. As was often true, those arrested early during the Great Purges tended to receive shorter sentences and had better chances for survival.

Released from Vorkuta, Postoiev found his lucky star had faded. Typical for those released from the GULag, he was not allowed to return to Tashkent or settle in any other major city. He went instead to Ukraine and obtained a part-time teaching position in Poltava.

When Soviet and Western astronomers met at Copenhagen in 1946 to discuss the future of the IAU, the Soviet delegation deleted Postoiev’s name from its list with the remark, “He went west with the Germans.”

Indeed, the German army occupied Poltava early in World War II. Postoiev and his family lived through two years of hunger and uncertainty, but in 1943 they seized their chance. As the German army began its retreat, Postoiev escaped as a common laborer taking his wife and seventeen-year-old son with him. The end of World War II left the Postoiev family as displaced persons (DPs) in the American zone of Germany.

Postoiev may have escaped the Soviet Union, but his troubles followed him. The lot of DPs was not a happy one. The British and American governments had agreed to Soviet demands that displaced Soviet citizens be repatriated, by force if necessary, and DPs did everything they could to avoid this fate. They knew that if they did return, it would be for a long prison term if they were lucky, for a firing squad if they were not.

Enter Harlow Shapley, director of Harvard College Observatory (HCO), an astrophysicist of world fame and a well-known humanitarian. After the Great Purges unfolded in the Soviet Union, Shapley spent years trying to learn the fate of Soviet colleagues who had disappeared without a trace. As Nazi Germany extended its grip over Europe, Shapley devoted much of his energy to spiriting Jewish astronomers to safety.

With fear of repatriation in the background, Postoiev wrote to Shapley describing his plight and saying, “I shall never abandon the hope for a better future and return to my science, but now I am ready to take any job, be it humblest in any part of the world in a free country.”

Between 1945 and 1950, Postoiev held several positions in in the International Refugee Organization under the UN Relief and Rehabilitation Administration (UNRRA). The director of the camp where Postoiev was detained wrote to the Tolstoy Foundation in New York and urged that a position be found for him: “The family, in our opinion, would be an asset to any American community and is capable of rapidly adjusting to American standards.”
Although Shapley, the Tolstoy Foundation, and others worked hard to bring Postoiev and his family to the US, their plans never quite succeeded. Finally, after many years of attempts, in November 1948, Shapley found funds to create a position for Postoiev at HCO. It seemed Postoiev’s odyssey had ended at last, but when he and his family applied for immigrant visas in 1949, they were turned down without explanation.

We will never know why Postoiev’s visa was denied, but the chronology offers hints. Anti-Communist paranoia was beginning to sweep across the United States, and Shapley had earned enemies in Washington. Or it could be that the interviewing U.S. Consul saw Postoiev as a Soviet agent? If so, the ironic tragedy of Postoiev’s life was complete, convicted without trial in the Soviet Union and now labeled a Communist by the United States.

Postoiev’s final letters to Shapley were full of foreboding, but his lucky star was about to return. It was Brazil that came to the rescue, offering to relocate Postoiev and his family. They arrived in Brazil in January 1952. Within a month, Postoiev was offered a position at the Instituto Astronômico e Geofísico (IAG) of the Universidade de São Paulo.

Postoiev went on to a long and fruitful career in Brazil. In 1953 he restarted the publication of Brazil’s Astronomical Yearbook that had not appeared since 1938, and he brought positional astronomy at IAG up to international levels. He was re-elected as a Brazilian representative to the IAU and travelled internationally on behalf of his adoptive country. Grateful to Brazil but not wanting to abandon his roots, he accepted Brazilian citizenship only in 1969.

Alexander Postoiev died in 1977 after a long illness. The odyssey was over. Stalin’s Great Purges of the 1930s had, unwittingly, given Brazil one of its brightest stars. Alexander Postoiev’s unwavering childhood memory of the Great Comet of 1910 sustained him through the greatest calamities of the twentieth century. It had brought him to a land where he could fulfill his childhood dream.

The author wishes to acknowledge the assistance of Drs. O. T. Matsuura and P. M. Dos Santos in reviewing this work and for permission from them and from Alexander Postoiev’s son Vadim Postoiev for use of family photos.