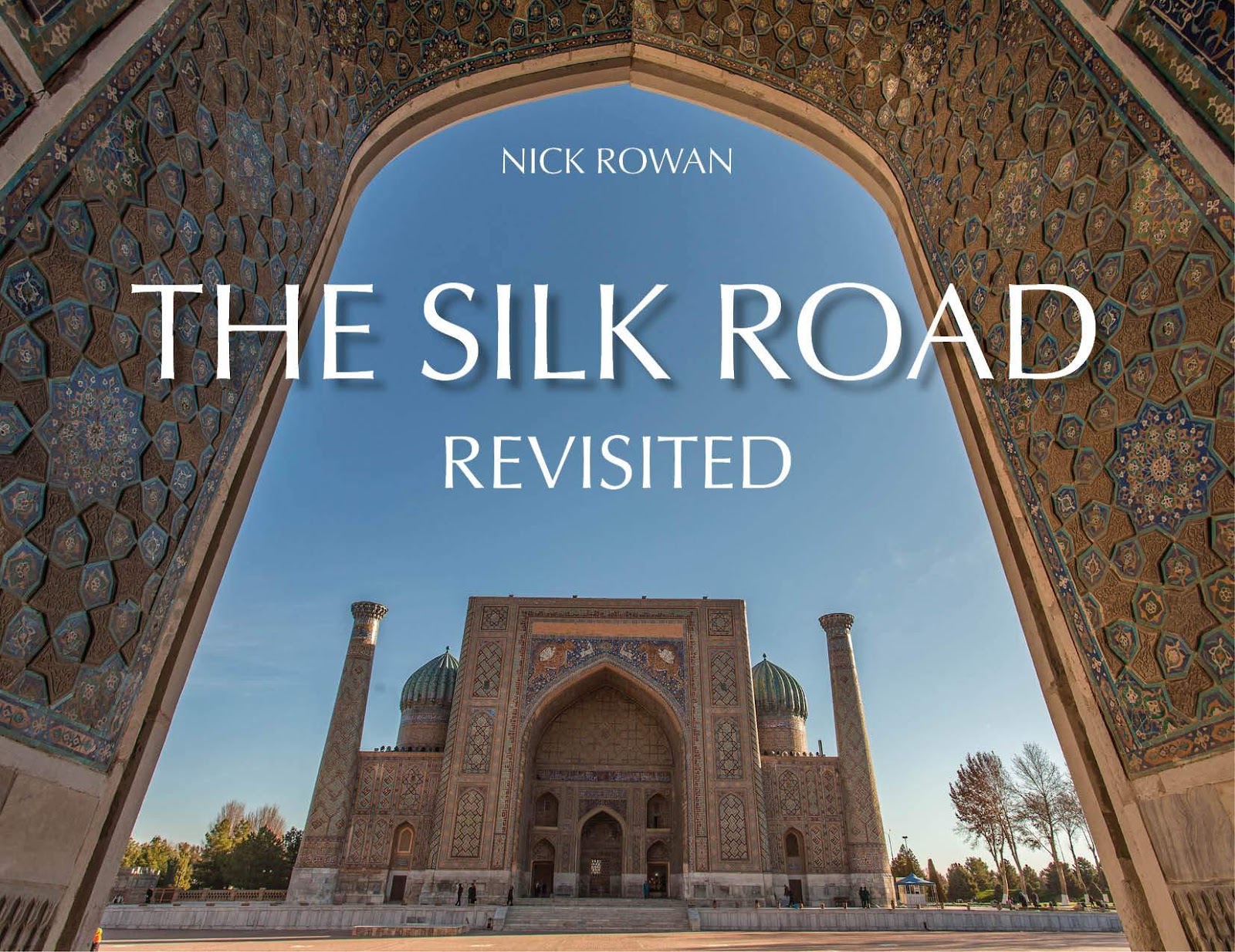 You can now order your copy today for £35!

The Silk Road Revisited is an enticing new book that invites the reader to take an exceptional cultural and historical journey throughout Europe, Persia, Central Asia and China along one of the world’s oldest trading routes.

For more than two millennia the Silk Road developed a vital set of trading arteries between East and West. At its height, the route stretched from Venice in Europe to Xi’an in Northern China. Covering more than 8,000 kilometres, it spanned a wealth of cultures and lands, hosting many of history’s great legends and stories. This vast commercial and cultural relay between countries, peoples and religions influenced and changed the world and its effects are still being felt today. This book celebrates and cherishes a part of the world that once held more power through trade than any single empire could hope and which once again, Phoenix-like, is rising from the ashes with a reborn flourish.

This is no ordinary book on history – it is a personal view of the Silk Road’s fascinating history that has made each country that once lined its route what it is today. Charting a course from West to East, the book deviates from the traditional East to West depiction of the Silk Road and provides new perspectives. The engaging text interweaves the history and legends of this remarkable, and often forgotten, part of our world history. It is complemented by captivating photography as the reader travels from charming and powerful Venice to the homeland of the Yellow Dragon, China, from snow-capped mountains of Kyrgyzstan to the vast steppes of Kazakhstan and from the fearless Turkic tribes to the noble Persian empires. In each chapter the reader also encounters the diverse peoples, delicious cuisine and delightful landscapes through both the vibrant photography and rich historical writing.

Nick Rowan is editor-in-chief of the UK published magazine, Open Central Asia, and author of “Friendly Steppes: A Silk Road Journey” that recounts his travel adventures along the Silk Road, Nick Rowan has an insatiable appetite for all things to do with the Silk Road. An Oxford University graduate, recently back from five years living in Moscow, Nick spends much of his spare time exploring Central Asia, having travelled to all the countries on numerous occasions, on the look-out for new experiences and people to meet. His new book, The Silk Road Revisited, seeks to capture the powerful influence that the history of the Silk Road has left on the countries as you find them today. It follows the success of Friendly Steppes: A Silk Road Journey, that recalls his first encounters as a traveller of the Silk Road from East to West.

Of his second book on the region, Nick says:

“It’s a book I have been writing for almost 15 years, ever since I made my own journey along the Silk Road. I wanted to capture just some of the fascinating history and cultural magic that makes the countries along the Silk Road today such marvellous places to visit and full of wonderful people to meet. The history of the Silk Road is complex, but this book hopes to unravel that a bit and complement it with stunning photography to really bring the words to life and open this part of world history that is so often dismissed and forgotten.”

Why have you chosen to write a history book as a follow up to your first book, Friendly Steppes, which was more of a travelogue?

I’m not a historian, nor am I a writer by trade and yet I have written books on both, so you could say I am a bit of an accidental historian! When I returned from my Silk Road travels in 2006, I started to write Friendly Steppes to recount my journey. In that book I wanted to put some of the historical context around the various encounters I made with the local people I met on my travels. The problem was that the history of the Silk Road is so vast, there was plenty of it that I simply couldn’t add without turning my already lengthy time into a thousand-page encyclopedia! This would have lost the real purpose of the book – to retell many of the wonderful characters’ stories as I found them. So, I started to collate my historical research and decided that some of it might be interesting to put together into a coffee table book where people could try and get a distillation of the vast history alongside photos of the region’s people and places. And this is where the book was born. After a couple of stop-starts with various publishers, finally, after 15 years, I found the opportunity with Hertfordshire Press to get it finalized and out in the market.

Which readers does The Silk Road Revisited target?

I’m clear that this is not an academic book. There are people far more qualified than me for that. But it is a book that I hope provides a succinct history of the Silk Road, explains how some of the familiar characters we have heard about such as Marco Polo, Alexander the Great, or Gengis Khan fit into the history while introducing a few others and trying to place the customs and traditions of the people you might meet today into that historical context. So the book will hopefully interest anyone who wants a brief introduction to the region, or who may have travelled there and wants to marvel again at the stories and scenery, or those who have yet to visit who want to see why the region where the Silk Road once set its course is such a fascinating place today.

The photographs are stunning and a real draw for the reader, giving them another insight into the culture and feeling of the region. Who is behind these wonderful images?

The Silk Road Revisited also represents the breathtaking work of a great many photographers and photojournalists, many of whom are members of the Eurasian Creative Guild and who have kindly donated their work to bring the historical text alive. For me their exhaustive and in-depth work has resulted in some of the most compelling and historic images of streets, buildings and landscapes from the region. The book wouldn’t be the same without these images – even if you don’t want to read the text, you can’t help but be drawn by the colour, splendour and intrigue from the subjects captured.

Why did you choose the Silk Road as your travel destination originally?

After leaving university I knew I wanted to travel but I didn’t want to travel for travel’s sake. I wanted to do something that was challenging, had an element of research and purpose and above all something that not many people had done. I considered travelling north to south from Alaska to Argentina and trying to cross every country of the African continent, but then I came across these strange-sounding “Stans” as I pored over an open map of the world. For hundreds of years they’d been part of the Soviet Union and not much was known or written about them, in English anyway. The media portrayed many of the countries along the Silk Road as dangerous and forbidden. Yet for thousands of years a famous and majestic trade route, now extinct, had passed there and quite a lot was known and had been written about the Silk Road. It made sense – travel and try to find out what influences this ancient trading route had had on these countries today. Best of all, there was actually never a single Silk Road – instead it was a network of arteries and capillaries that collided and divided along the entire breadth of the trading route both East to West and North to South, so whichever route I travelled would be my own route, distinct from great travellers of the past like Marco Polo. That promised quite some adventure!

What lessons can be learned from the Silk Road’s history that can be applied today?

Winston Churchill once said that “a nation that forgets its past has no future”. For me, in today’s world where quite often people try to forget their past in search of the future I think this could not be more true. For almost a hundred years under the Soviet regimes many of the Silk Road countries were hidden behind a veil, and now that this has been lifted they have the chance to regain their former glories and make the most of their strategic location again – people may not be trading silk but with oil, gas, power, minerals, culture and even some ancient technologies from the past it provides me hope that the Silk Road is as relevant today as it ever was. And yes, there have been turbulent times in many of the countries’ histories but there were also times of great peace, where religions lived hand in hand in tolerance and acceptance, alongside open trade that brought wealth and security and places where new ideas and technology spread. I have great hope that the countries along the Silk Road can regain that purpose, outcome and outlook on life that for centuries thrived, and perhaps this time it might involve a few less bloodthirsty conquerors!

What part of your journey was the most challenging?

I’ve always had a thing about border crossings. I just don’t like them. I have nothing to hide, but the officialdom and knowledge that your fate is in the hands of a bored uniformed officer does nothing to ease my apprehension. Friendly Steppers mentions most of these because they are always a time of heightened tension whether it was trying to leave the practical joking guards on the Azeri port border or arguing with the Uzbek customs officer that my mis-declaration of 150,000 in currency was of the worthless Turkmen money rather than US dollars! The other time, when I felt really alone, was in Bosnia, a country shattered by conflict and still bearing the scars of today. I sat one evening reflecting on the stories I had heard of the war and just wanted to get away – and then I realised that I was missing home and only getting further away as I ventured towards the East. Funnily enough all the logistical and language challenges I faced later on in the trip always just seemed part of the fun – even having had the odd gun pointed at me by some jumped up military teenager in Turkmenbashi port made me smile, after the event of course.

What are the highlights of the Silk Road?

That’s simple – the people. Most of the people I met (excluding border guards and taxi drivers) were simply charming and welcoming. Their inquisitive hospitality left me feeling embarrassed at the way we treat foreign visitors to Europe. People had so much time to help me when I was lost or speak with me when I was lonely and before long an invitation would follow for me to meet their whole family. Of course, the architecture of Samarkand’s glistening blue domes, the stature of Kyrgyzstan’s mountains, the mesmerizing colour of Turkey’s bazaars and the sheer expanse of the Turkmen desert, with its burning gas crater, are impressive sights already out of the ordinary. And then comes the history which The Silk Road Revisited tries to capture a few slices of – everywhere is dripping in it – empires, enlightenment and technology all emanate from it.

You can order books at

Signed copies available on request directly from the author.

Review copies may be available on request for media purposes. Please contact the publisher below outlining your proposed media coverage. Distribution of review copies is strictly at the sole discretion of the publisher.

For those interested in more up to date information, news and opinions from the region, quarterly magazine, OCA Magazine provides the perfect companion. Nick Rowan is currently the magazine’s Editor-in-Chief.

To contact Nick Rowan for an interview, article or appearance please email: nick.rowan@ocamagazine.com