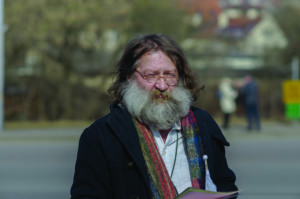 Tomas Čepaitis has been an ECG member since 2017. He is an essayist, English translator, and speaker of Lithuanian, Polish and French languages. He is also the publisher of the “Glashatay Zarechiya” newspaper and the “Zarzecze” Publishing house in Vilnius, and has been a European Culture Parliament member since 2013. Tomas translates verse, prose, dramatical works (from the likes of W.Saroyan, Y.Erlickas, S.T.Kondrotas and Laurence Stern) as well as scientific texts. He is the author of libretto, songs, musicals and rock operas and the winner of the “Haiku to Vilnius” award (2009).

Besides, Tomas is one of the founders of a unique art project – Užupis Republic – a bohemian neighborhood-turned-independent-Republic based in Vilnius, the capital of Lithuania. Currently Tomas is the Minister of Foreign Affairs of this “Republic”. It is not the first of such small micro-republics to sprout up across the world, but as with all such places it has an interesting story to tell.

Initially Užupis was a district largely located in Vilnius’ old town; today it is a UNESCO World Heritage Site. Užupis means “the other side of the river” in the Lithuanian language and refers to the Vilnia River; the name Vilnius was derived from the river Vilnia.

The district contains the Bernardine Cemetery, one of the oldest cemeteries in the city. Most of the district’s Jewish population were killed during the Holocaust, and later the old Jewish Cemetery further uphill would be destroyed during Soviet times. The houses left abandoned were later occupied by marginal elements of society, mainly the homeless and prostitutes. Until Lithuania’s declaration of independence in 1990, it was one of the most neglected areas in the city, containing many run-down houses, largely without utilities. The district has been a common haunt of artists and bohemians since Soviet times, and even today many young artists are squatting in abandoned buildings near the Vilnia River. 2013 saw the inauguration of two big art centres by the river and by the gymnasium.

The “Art Republic Užupis” was founded on April 1, 1997 (April Fools’ Day) when the district declared itself an independent republic (The Republic of Užupis).

This community started life as a squat. In 1997 the residents of the area declared that Republic of Užupis, put up their own independent flag, issued currency, postage stamps, and elected a president, and a cabinet of ministers. Of course, today artists are no longer squatting…but many art students still rent flats here.

Meanwhile Tomas is the author of the famous Užupis constitution, which was co-written in a couple of hours with his friend Romas Lileikis, who later became the President of Užupis. Romas Lileikis is himself a poet, a musician, and a film director. This whimsical text, which also doubles as a Bill of Rights, would come to embody the philosophy and character of the newly-formed nation.

Today the population of Užupis is about 7,000 inhabitants including approximately 1,000 artists. The Republic even has its own national anthem, money, passport stamp, and an army (numbering something like 11 men)! Each year they celebrate their independence on Užupis Day, April 1.

Artistic endeavors are the main preoccupation of the Republic.

The symbol of Užupis is an Angel – a statue of an angel blowing a trumpet – which was unveiled in the main square on April 1, 2002. It became a symbol of the revival Užupis. Previously, a temporary sculpture of an egg stood in its place. The egg itself became the subject of various anecdotes. After being replaced by the larger statue of Gabriel, the egg was sold at an auction and now stands on Pylimo street.
Even Artūras Zuokas, a former mayor of Vilnius, lives in Užupis and frequently takes part in the Republic’s events. Užupis does not house Internet-cafes, kiosks, big malls, or governmental institutions (except Užupian ones), and there is no embassy to Lithuania.

It is not a new idea – to organize free spaces, and it is popular around the world – squats, art spaces, intentional communities, alternative festivals, parties and dance events, eco-villages, etc. are rather popular. And, meanwhile, Užupis is not the only autonomous micro-nation in Europe. The most famous self-proclaimed autonomous village in Europe is Freetown Christiania in Copenhagen, Denmark. There are, of course, quite a few differences. The number of people living in Christiania seems to be considerably smaller, officially below 1000.

But the project started by Tomas Čepaitis remains unique. Where Užupis seems to be not only condoned, but even celebrated by members of the Lithuanian Parliament, Freetown Christiania’s relationship with Denmark would appear to have been considerably rockier. Some long-term residents of Christiania even had the idea to buy (or rent) all of the land occupied by Christiania from the Danish State.

In Užupis artists, local people and visionaries have joined forces to creatively turn the area into a place of the ‘beyond’. Beyond, in the sense of being ‘wished for’, a collection of mindscapes and spaces for possibilities to become realities. Juhani Ihanus, Užupis Ambassador to Helsinki and Beyond, calls it a place that is not ‘owned’. He says, “Užupis is not ‘ours’, not belonging to ‘us’, to ‘our’ group or pals. If owned, it would become an institution systematically depriving its members of their individual rights. Perhaps it is for nomadic seekers of changing truths, for the wise and the ship of fools.”

So, Tomas, his friends and colleagues have found their own understanding of freedom in their free cultural creative space.

As Tomas says, “I was always a defender of small ways in politics, which do not harm other people. It is possible for humanity to survive, if it turns to restoring the stories of your generations, personal family sagas, and harmonize them with the times. There is no progress in the world, it is an illusion. Only installing new districts, while destroying old ones to build a “future oasis” is in fact a runaway from reality, cutting the roots and natural Godgiven rhythm. And every place, district of the world has its own sense and possibilities, not less richer than Uzhupis had. Every place deserves the same reverence, as was given by us to Užupis, and is waiting for its genius loci to return, as English poet Alexander Pope stated even in the 18th century.”