The artist, Zhurkabayeva Guldana, is on the threshold of her first mature personal exhibition “WAY TO YOURSELF” that will be held at the Museum of the First President of the Republic of Kazakhstan. This sums up the results of what has been done since her first personal exhibition of 2008. Since then the artist has created about 150 creative works. 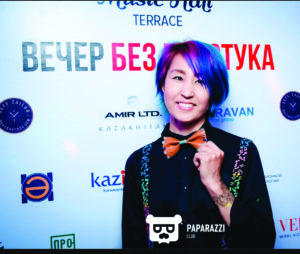 During her training as an interior designer, Guldana began to take great interest in painting and graphics. At the same time she made a choice in favour of
free creativity in the field of easel painting.

The works of Zhurkabayeva Guldana reflect the signs of modern Kazakh art, where it is possible to see a mixture of techniques of Decorative and Applied Arts, a message to the symbolism of rock paintings, a historical past and comprehension of national symbols, both medieval and modern. At the same time, various works refer to the style trends of the 20th century. But most of all, her works also have a lot of their own, personal style.

The silhouettes, symbols, proportions and plots of ancient rock carvings are aligned with a texture of natural “wild” material. The use of animal skins, the unpolished fur gives the impression of ancient messages. The “animal style” of the Scythians is repeatedly seen in the works of this modern master and other from Kazakhstan. The themes of totemism and shamanism are close and exciting for many contemporaries. Here the artist rethinks ancient symbols, extensively using them in her work. The works on the skin “Scythian Motifs”, “ Deer Hunting”, “Cave Circulation”, “Petroglyphs of Tamgaly”, “Sounds from the Past” and many others were made by the author under the impression of the first drawings of mankind.

To bring your vision and to be understood by the viewer is not an easy task, especially if emotional feelings are added to it. The artist is given the gift to see the world in a different way. The world is bifurcated, divided and emotionally sharp in the works of Guldana.
Shortly before her first personal exhibition, Guldana underwent serious eye surgery, after which she saw the real world in a fragmented, divided state. Not only was her acuity of vision changed, but also the estimation of the size of objects and the distances between them. The artist does not just represent a divided world, she lives in it.
The fragmented vision of the world, which for an ordinary person would be a disaster, for a true artist, perhaps, is a starting point for artistic experiments. The multiple projection of forms, or separation of compositions into the right and left parts, occurs in many of Guldana’s works, for example in one of her earliest works “Cause and Effect”. Here, conditionally depicted is an eye shape, torn in the centre, which reflects an endlessly repeated series of figures, like a reflection in a room of mirrors. All the expression of an irreversible reality is perceptible in this work. In general, in the most of Guldana’s paintings, we can see images of human eyes, “Glance of Green Eyes”, “The Priests of the Eye”, “Where is a Saviour?”, “Displacements” and many others. The eyes are one of the main symbols, a window into a kind of unreal world and the centre of the universe and the reflection – the mirror of the soul.
Choosing a theme for her future works, Guldana tries to fully reveal and diversify the motives of her works, sometimes looking for answers in the works of old masters.

Inspired by the creativity of the surrealists Giorgio de Chirico and Salvador Dali, she experiments with the shape and space as exemplified by the painting “The Unconscious”. In a flaming timeless space, on conventionally designated architectural forms, a lonely, lifeless sculptural figure melts.

In other works of Guldana, we see the philosophy of Buddhism, “Meditation in the dimensions,” “The East is a subtle matter”. Guldana often discusses religion, self-knowledge, faith in yourself and God. The names of recent works “Order in Chaos”, “Do it Now”, “Living Energy”, “Mirror of the World”, “Dissolve in Motion”, presented at the exhibition, clearly demonstrate it.

The all these works were created in the technique of traditional easel painting. Guldana learns new material for herself and the themes of the works tell about many deep thoughts of the transience of life, death and love. The philosophy of the latest works reveals maturity and readiness for self-development, scrupulous work in the ratio of colour elements, the search for form and harmony of composition.
ZHURKABAYEVA GULDANA
(ALINA) TURSYNOVNA.
Kazakhstan, Astana

Kazakhstani artist Guldana Zhurkabayeva, known to the creative world under a pseudonym “Alina”, expresses her inner world in her only artistic form. Her works are executed in a nomadic style of natural material with the use of skins and leather, filled with ancient symbols, sacred secrets and petroglyphs. Impregnated with a steppe smell of Artemisia, they attracted foreign experts’ interest and critics who awarded the first place at the International Festival of art “Tanysu” (San Marino, Italy).

Today the master gradually departs from Decorative and Applied Arts and tries herself in a new kind of fine art – painting. The first initiatives were highly appreciated at the exhibition “The Way to Yourself”, held at the beginning of the year at the Museum of the First President of the Republic of Kazakhstan.

But those, who are not closely acquainted with the artist are hardly aware of her special vision of the surrounding world and the diagnosis with which the master of paintings has been living for decades (constant double vision).

“This is a rare disease and cannot be cured. Only the philosophy of OSHO helped me to understand that it is my advantage, my UNIQUENESS, that gives me an opportunity to look at the world in a new way”.
The master always reflects an inner temperament in her works. Guldana Zhurkabayeva’s paintings are bright, colorful and the whole dance of singing colors is nothing more than a reflection of the artist’s soul. Absolute harmony.

But has it always been this way?

The task of art does not consist in the most accurate representation of reality, but in the depiction of the artist’s personality and their special view of the world, fantasies, memories, aspirations and visions from a special angle.

Guldana does not adhere to a certain style, but simply follows her impulse, transferring her energy and creating a living surface on the canvas, in some of her works, the avant-garde direction is clearly observed.

For what will a spiritual search lead the master? What will happen next: cubism, neoclassicism, surrealism, modern, nobody knows, even the artist herself.

As many talented people, Guldana is not afraid to try herself in different hypostases and besides paintings, she also creates designer accessories. Guldana is planning to realize and develop herself in this direction.