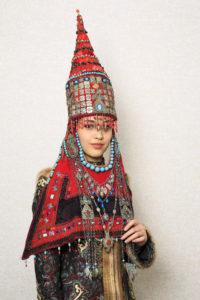 Raphael Khalitov, a Kazan collector, owns a unique collection of articles of applied art and ethnography of the Turkic culture of the 17th–19th centuries, which have been inherited – for centuries – within his family on the side of his mother’s great-grandfather, Zarifoullah. As to Raphael-efendi himself, he comes from the Xo‘jayli District of Uzbekistan. His ancestors were from the village of Kushar of the Kazan District of the Kazan Province (currently in the Atninsky District of the Republic of Tatarstan). The family of his grandfather and grandmother moved to Central Asia in the 30s of the past century saving themselves from dekulakisation at the period of collectivisation.

Raphael Khalitov came to know about the ancient family treasures shortly before his father’s death in 2009: “Father told me in his dying hours that parents of my mother were from the village of Kushar and that the major portion of these ancient articles was from there. He left it all to me as to his eldest son…”

The family collection contains about one hundred works of art. They include jewellery articles, household and interior items from dwellings of the Turkic nomads, manuscripts in the Arabic and the Old-Tatar languages, coins, cloths with tambour embroidery united by cultural peculiarities that are typical for peoples of the Turkic origin, and much more. The rare headgear of a noble Tatar woman from the Nogai family of the 17th–18th centuries is a true gem and pride of the collection.

The headgear complex is decorated with jewellery pendants with turquoise and cornelian stones of different shapes. Attached to the lower rim of the hat (on its sides) is the chest ornament made of the red cloth with a deep cut for head. There are small irregular and horn-shaped ornaments on the chest ornament that were widespread at the period of the late Medieval Age with many nomadic Turkic peoples, including the Nogais. Attached to the back side of the hat is the cloth plait ornament that covered the plaits of a woman. It is made of a silk cloth on a semi-rigid base and is decorated, just like the chest ornament, with irregular and horn-shaped embroidered pattern, semi-precious stones and jewellery pendants. Surprising and fascinating is the fact that the headgear of a Turkic woman has preserved in one copy only in the territory of the Republic of Tatarstan. Historians and ethnographers assume that it belonged to the tsar’s family of the last ruler of the Kazan Khanate (15th–16th centuries), Tsarina Syuyumbike (Sumbecca) (circa 1516–1557). As is known, Syuyumbike was daughter to the Nogai Bey Yusuf and a great granddaughter of Edigey (Edigu), the founder of the dynasty of the Nogai Horde.

This headgear represents an early version of the framed festive (wedding) headdress of the Turkic peoples of Eurasia that was used by nobles of certain regions until the early 20th century. Svetlana Suslova, Senior Researcher of Department for Ethnology of the Shigabutdin Marjani Institute of History of the Academy of Sciences of the Republic of Tatarstan, Candidate of Historical Science, underlines in her expert opinion that the headgear belonged to the Yaushevs, the ancient princes of the Zakazanye (north-western part of the Kazan Khanate), who were known from documented sources as early as from the times of the Kazan Khanate. The Yaushevs carried out an active diplomatic and trade activity in the Kazakh steppes and in the states of Central Asia, as well as performed some administrative functions in the Kazan Territory.

The other peculiar features of the collection include the horse harness of the 16th century that consists of 28 fragments, the men’s kalyapush skullcap (18th–early 19th century), bracelets, ear-rings, signet-rings, rings, pendants (17th–early 20th century), and so on.

The value of the family collection of Raphael Khalitov is truly great. A considerable portion of the collection of items was gathered in the territory of the Republic of Tatarstan and in Central Asia. They introduce us to several centuries of life and to the habits of the Turkic nomads. Many items are unique and cannot be found in collections of museums of the Republic of Tatarstan and the Russian Federation.

The collection of Raphael Khalitov was displayed in Kazan two times. The first was in March of 2014, at the National Museum of the Republic of Tatarstan, titled “Return from the Past”. The second time was in February 2017, at the Museum of Statehood of the Republic of Tatarstan under the Kazan Kremlin State Historical, Architectural, and Art Museum Reserve, titled “Journey to the Past: Turkic Culture Items from the Family Collection of Raphael Khalitov”.

According to opinion of the leading experts, the treasures from the collection of Raphael Khalitov are of great scientific and historical value. Expert opinions are available. This unique collection of the Turkic culture of the Yaushev Princes, which survived by miracle in one copy only, is now on sale. The price of the collection is EUR500 000. Who will become their new owner?