1
On the wild steppes of Transbaikalia,
Where people dig for gold in the mountains,
A vagrant, bemoaning his fate,
Is wandering with a bag on his back.

2
He walks through the thick taiga,
Where only a few birds sing,
He carries a tin can on his side,
His feet are strapped in dry skins.

3
He wears a worn-out shirt
And a lot of different patches.
The cap on his head is a convict’s cap
And he wears a grey convict’s uniform.

4
He escaped from prison during a dark night
Where he was imprisoned for defending the truth.
But he could not go any further
In front of him was Lake Baikal. 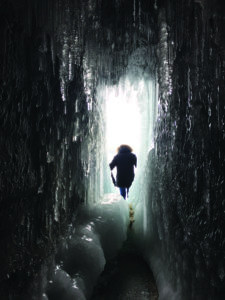 For many the thought of Siberia sends shivers down the spine. Meaning “sleeping land” in the Tartar language, this vast area of land, which could itself swallow all fifty states of America with millions of square miles to spare, it is hard to imagine that it housed some of the most notoriously brutal labour camps that Russia had ever sought to construct. Coupled with this land mass’ renowned arctic temperatures, it is not a place most people would wish to find themselves in the middle of the Russian winter.

Before the dawn of mass tourism, you might have found yourself reading in a journal about the harsh, wild and insidious nature that engulfed the small cities in Siberia. It would not have been surprising since the region was mostly famed as a place good only for exiling criminals. So harsh and inhospitable was the terrain that many exiles were imprisoned only by nature – free to roam, but knowing that by leaving the relative safety of towns such as Irkutsk meant only one thing – death. This spiritual barrenland has challenged explorers and exiles alike, with its endless stretches defeating even the hardiest of humankind – except the very few who survived and even those still bore their scars long after.

But Siberia is a land of superlatives – forget that three of the world’s longest rivers flow through it – Lake Baikal tops them all. It is the greatest, deepest and purest of body of water on the planet. At 395 miles long, 49 miles long and just over a mile deep, formed from a natural geological rift, this unique lake has, in more recent times, captured many with its beauty and mysticism.

Home not only to many thousands of unique species of plants and animals, it is also home to the Buryat tribes who follow shamanistic practices that enable them to interact with the spiritual world under altered states of consciousness. This religion also spread across the Silk Roads into Central Asia and China mingling with and becoming adapted into parts of other religions over time. A trip to Baikal is not complete without contemplating the origin and impact it has had on the region.

So, as I landed in Irkutsk, after six hours of the delights of Aeroflot from Moscow, one cool March evening, I was intrigued to see this famed lake. The wonders of modern travel enabled me to make the trip to Lake Baikal just for the weekend. Putting aside the 5-hour time difference to Moscow, I sought to rest and relax before tackling a torturously long 16-hour daytrip the following day that would enable me to reach famed Olkhon island.

This dramatic looking island is the result of millions of years of tectonic movement and today boasts a population of just 1,500 Buryats within its 730 square kilometres of terrain. From the mainland it looked an ideally barren and unforgiving place to situate a Gulag. I waited for a cramped hivus hovercraft to take me over the 800 metres or so distance between the island shore and the mainland. It was here that I got my first glimpse of one of the main reasons I had come to visit at this time of year – the Baikal ice.

Only from the middle of winter in January until April does the whole lake freeze, but it is a phenomenon that bewitches all who visit and walk on her magical ice. Its transparency is striking – even at this “late” stage of the season, parts of the ice, are crystal clear. You walk as though on a mirror, but the clarity means that even though the ice is over a metre thick you tread gingerly. If I were concerned that I might just hit a weak patch and fall through, I needn’t have been. A two ton UAZ-452 Soviet van drove straight onto the ice to pick me up and take the ice road around the northern part of the island.

The wind, which whipped me ferociously as it swept around the cliffs, was calmer as I got out from the truck having driven at almost 90km/hr across the ice. We had arrived at a little rocky outcrop not far from the main village, Khuzir. A couple of other tours, also in their UAZ vans, had turned up to admire the ice and in particular the ice caves where large icicles compete for space and attention above you as you tread deeper inside. It is like an ice kingdom, but a silent, eerie one. Civilisation is almost non-existent and nature is as pure as it can get. You can drink the water that drips form the icicles as the warmer spring temperature causes them to melt. I partook in a small local tradition, that involved pepper vodka, of course, with my guide and then took an additional shot with a broken icicle to provide the “rocks” to my makeshift cocktail.

We continued driving on the ice road. Our driver thought the ice was not clear enough where we were as it has started to melt and go cloudy – apparently two days ago the official tourist season for ice driving came to an end. He seemed as confident as ever that there was at least another week or so that he could drive on the ice, but my guide related stories that had been heard about areas where the ice had thinned and vehicles had sunk.
Lunch was taken near the Three Brothers Rock (Sagaan-Kushun Cape), a natural monument that symbolises the main characters of an old Buryatian legend. Centering around three brothers who once lived on Olkhon Island, according to the legend, their father had supernatural powers and turned them into eagles providing they did not eat meat. The newfound freedom allowed the brothers to fly around the island and enjoy it as they had never before. However, they soon tired and became hungry, whereupon they came across a dead animal and, despite their promises to their father, ate the animal. When their father learned about this he was so angry that he turned them into the three rocks that can be seen today. The irony of this being an idyllic picnic places therefore was not lost on me.

Lunch turned out to be rice with boiled omul fish – a delicacy and local fish to lake Baikal, the fishing of which had recently been severely curtailed amid worries of extinction. “Contraband!” my driver delighted as he served up a prepared meal in a plastic box. It was still warm from the morning’s preparation. Its crumbly flakes were like butter as I made my way through this simple gastronomic delight.

The day ended at the tip of the island having travelled its entire length mostly by ice road. The Khoboy Cape sits at the most northern point of Olkhon island, deriving its name from an old Buryat word meaning “fang” because of its distinctive shape – an out-of-place vertically oriented marble rock, appearing fang-like from the cliffs. Here already, one of the long multi-kilometre cracks had appeared close to the rocks. Occasionally a cracking sound ricocheted across the rocks, reminding me that we really were at the end of the winter. Large slabs of crystal-clear ice, like waves frozen in time, had piled up making their own ice sculptures that I had to tread across and around. Without crampons each one was a slippery danger, but also a mesmerising beauty. Occasionally on the ice underfoot, small frozen bubbles of methane added dabs of white cloudiness amongst the thick ice – it was this that was most reassuring – the ice underfoot really was still solid and thick.

Irkutsk was still nearly 5 hours away, but out there in the wilderness it was hard to remember that a bustling life existed somewhere over the distant horizon. It must have been even harder still for those exiled inhabitants of the Gulags and other camps to remember or believe that such a distant life still existed.

P.S.
The author travelled to Irkutsk from Moscow with Aeroflot (four flights a day), staying in the four star Japanese-styled Hotel Sayen in Irkutsk and travelling to Olkhon with Russia EGuide tours (https://www.russiaeguide.com/one-day-tour-to-olkhon-island.html) – 1pax 28,000 RUB; 4 pax 9,300 RUB pp. Hovercraft 350RUB per person each way. It is recommended to spend at least 3 days for such a tour but if willing to spend a significant time in the car coupled with an early start then a one-day tour will get you to see most of the sights even if you won’t get to experience as much time of life on the island as would be ideal!