The media call him the “Belarusian Nick Vujicic” (Originally a world famous preacher from the USA, born without legs and hands). Only in early 2017, at the age of 34, Alexey Talay began practicing professional sports. He has achieved incredible results in a short period of time – he was awarded the Master of Sport title, he is a member of the National Paralympic Team of Belarus in swimming and a multiple record holder throughout the World and Europe. 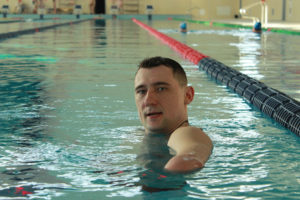 Public activist, Motivational Speaker and entrepreneur, Talay has visited many countries in Europe, CIS, Russia and 30 states of the United States, as well as India with his speeches. He is a father of four children, a philanthropist and the founder of the Children’s Aid Foundation.

Working abroad, Alexey acts as a Goodwill Ambassador for the Republic of Belarus. He lectures about the country, encourages local businesses to invest in the economy of the government and to develop collaborative projects.

Tragedy happened when Alexey, a 16-year-old boy, stepped on a shell that had been left in the ground since the World War II and it exploded. The shell fell during fierce battles with the Nazis invaded his hometown of Orsha. It was on the anniversary of the end of the war, May 8, 1999, that this event changed Alexey’s life completely. The exploding shell ripped off Alexey’s arms and legs. Life full of hopes and plans stopped at once. The turning point in the life of the future champion was the days spent in Germany, where he underwent rehabilitation. There, he faced the terrible fate of children with cancer. They endured the most severe surgeries, losing their vision and losing their organs. The situation they were in seemed to be much worse than his and this gave him strength.

Alexey personally did not accept the fact that the only window into the world for him would be the TV. He read a lot, including classics and modern literature, finding in the characters of books examples to follow.

“Now I can run my business without arms and legs. Thanks to the latest technology, I correspond, negotiate and manage my Facebook page. None of this happened back then. I was alone with myself, and it was only through the characters of novels and stories I was gaining experience. In their actions I found clues – how to behave, what decisions to make,” Talay continues in an interview.

TO FIGHT AND SEEK,
TO FIND AND NOT TO GIVE UP.

To children and teenagers of today, Alexey advises not to disregard books. Perhaps soon there will be his story in the libraries and on the shelves, the story of a man without arms and legs, who became a champion, made a family, ran his business and helped people with disabilities like him.
“My training and lectures are very popular. I explain how I endured pain, how I fell in the mud with my face, how I withstood the mockery by people who seemed to be close to me, the most respected people for me. In my training, I encourage people, whatever your situation, do not give up,” Talay recalls.

He told how he saw very different reactions from the people he encountered. How he registered his business and went through the offices. They used to say things behind his back: what was he doing here? Couldn’t he ask his mother or his brother to come instead of him? Is he showing off, trying to prove something?

The behaviour of people around him made Alexey doubt – maybe he was really overreaching, maybe he was an invalid. His fate was already sealed – he would live out his days in sadness and gloom. Then a new stage began for him – one where he could overcome of doubts.

“And I said to myself, no! You can’t take me, this is my life. Only I will live it. If you don’t like me, don’t look at me,” Talay comments on his situation.

THE ROAD TO SPORT

About eight years ago, watching the Paralympic Games on TV, inspired by courageous people, he began to dream about sports – suddenly he realised that he could be good at something. Alexey came to the Paralympic Committee in Minsk and met with officials. They looked at him, thought about it and offered him the opportunity to go swimming. “I had to forget about my courses. That means I had to give up the opportunity to earn money by conducting public motivational meetings. Thank God, I had a financial safety cushion, and I financed myself,” Talay recalls.

He should’ve forgotten about everything in the world. He was practising. Coming back home, he fell down exhausted, slept and the next day he started all over again. And so, month after month, friends would say to him, “You’re a grown man, a family man, a father of your children, why would you do that?” During this period he was supported by his wife (Alexey married again), and two months later Alexey Talay swam to a standard that surprised most.

“Today I am a European and World record-breaker in the 50m breaststroke, so I have already made history in the world Paralympic sport,” said Alexey on the day of his triumph.

Today Alexey is more often with his training and lectures in Russia and the former Soviet Union republics – Kazakhstan, Kyrgyzstan, Ukraine. He performs a lot in Belarus. Together with the government of Minsk and the Belarusian Association of Athletics, Alexey Talay and his charity foundation work on a program to prevent suicide among young people. “In the European Union, these trends are clearly manifested. But there are also some cases of suicide in Belarus. When I, father of four children, hear about it, it my heart breaks,” says Alexey. 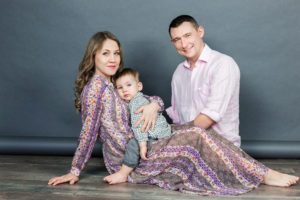 “We will act to overcome stigma towards children with disabilities. Now we have started such a project, together with UNICEF, other state structures and organisations, and with the support of the Foundation and financial support of the Russian Federation.”

“I will personally describe my unique life experience, about those steps to happiness, about the path to independence, about success in life, and about my family. This project will be carried out throughout the country, and in all regions”.