I used to dream of visiting Central Asia. For 12 years, first while studying in Russia, and then working in jobs connected with the Russian-speaking world, I longed to one day find myself in a city on the Silk Route, talking with the people, and immersing myself in the markets.

In 2017 I booked a trip to Almaty, and my dream finally came true. I would be in this lively city tucked against the Tien Shan mountains for a week. Only there was a twist: this was a business trip, for my new job writing reports about the wine & spirits industry. The people I was in Kazakhstan to meet were managers at alcohol companies; the markets I was there to learn about were business markets. 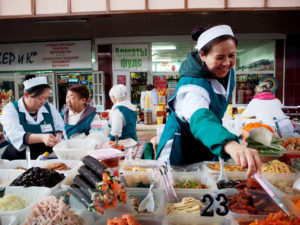 But still, landing in Almaty, I couldn’t bring myself to think like a business traveller. I booked a basic room in a little Kazakh hotel on Tole Bi street, and planned my work so that, between several meetings each day in offices all around the city, I could see as much of Kazakhstan as possible. I organised morning meetings with the companies close to the hotel, so I could walk to their offices and take some photos on the way. One company was on the same street as a cafe serving Dungan food, so I arranged to go there after lunch, and slurped some laghman noodles as I waited. I had to see a wine importer based in the fancy Dostyk Plaza mall; I made it my last appointment of the day, so I could walk through the shops before going back to the hotel. 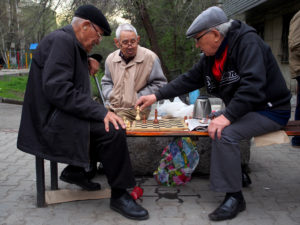 But it was in the meetings themselves that I really experienced the many sides of Kazakhstan. In a boardroom in Nurly Tau business centre, Almaty’s prestigious new complex of skyscrapers close to the mountains, a lady at a whisky distributor told me that their sales were growing, as more middle-class Kazakhs now want to experience the products and lifestyles that are trendy in Europe. Later, in a dark and crumbling office on Nurmakova street, I also learned that a local vodka company is struggling, because many of the poorer people in Kazakhstan’s regions are reconnecting with Islam, and so turning away from alcohol.

Each day I met Kazakhs of all ages and backgrounds. There was a former finance minister (an influential advisor to Nursultan Nazarbayev), who had discovered an abandoned vineyard in the Assa Valley outside Almaty, and had made it his mission to bring it back to life. After him I met two young lads working in the reception of another company. They drove me to my next meeting when my taxi didn’t turn up, and were stunned to receive a 3,000 tenge tip to share. I met ethnic Kazakhs, Russian Kazakhs and Armenian Kazakhs, and each of them taught me something new about their country. 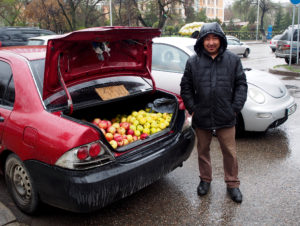 Walking between meetings carrying a list of addresses, I spent half my time getting lost. I wandered into a deserted apartment block on the edge of the city hoping there was a wine company on the third floor, before realising that the building I needed was further down the street. In another dark building I thought I found the office of a beer company, until some paramedics came and opened the doors to a clinic. Once, completely disoriented and soaked with rain, I had to hitch-hike to a meeting. A cheerful man picked me up off Abay Avenue in less than a minute. I thought about my colleagues from London who were in other cities at that time, researching reports on other countries. They were calling cabs to modern business centres in the centre of Paris, Sydney, New York…

But I didn’t envy them. Their meetings were only about cold numbers and data; in Central Asia, I found out, you can’t talk business without the human touch as well. Arriving at each office speaking fluent-but-flustered Russian, my contacts in Almaty always tried to make me feel at home. The former finance minister gave me two bottles from his resurrected vineyard; another company presented me with a beautiful notepad to write my meeting notes in. Knowing that I was English, one man broke the ice by asking me who my favourite snooker player was. I don’t think this would happen in Paris.

The weekend before I flew home, I had to write up my reports. But I couldn’t spend my last two days in Kazakhstan stuck in a hotel room. Instead I worked by night, putting the numbers into my spreadsheets until 3am, fuelling myself with the apples that Almaty is famous for. Then I got up at dawn to explore every street that I hadn’t been to yet. I spent a morning in the murmurs of the Green Bazaar, and chatted to the sellers about what they were selling – everything from fruits and nuts to homemade medicinal potions. 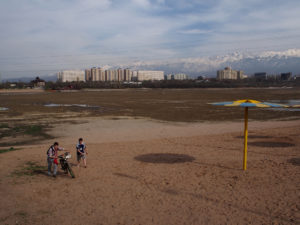 The lady from the whisky company had told me to go to Shymbulak ski resort, in the mountains above Almaty. But I didn’t make it: I got on the wrong marshrutka bus on Al Farabi street and ended up 30km away, in the bedlam of the Altyn Orda bazaar.

When I left the company, and stopped travelling to cities in Eurasia for these meetings, I thought I had said goodbye to this part of the world forever. Then one week out of the blue, I found myself back in Central Asia – in Almaty again, for a press trip with Air Astana. This time it really was to immerse myself in Kazakhstan. But on reflection, the business trip those years before taught me much more.

text by Jonathan Campion writes about his travels in Central Asia, the Caucasus, Russia and Europe at jonathancampion.com.

He is also a translator, editor, and still works as an analyst.