The vice-сhairman of Eurasian Creative Guild (London), Marat Akhmedjanov, visited the official opening ceremony of the international conference “TAPI – the Pipeline for Peace and Cooperation” and the roadshow “Oil and Gas of Turkmenistan” which took place in the Al Maha conference hall of the Hyatt Regency Dubai Creek Heights Hotel on 24 February 2020. 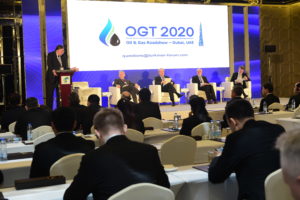 Yagshigeldy Kakaev, Advisor to the President of Turkmenistan on Oil and Gas Issues, addressed delegates with a welcoming speech. Noting the role of Turkmenistan’s neutrality as an effective mechanism for establishing fruitful co-operation in addressing pressing issues, strengthening the friendly, good neighbourly relations between states and peoples, Yagshigeldy Kakaev urged potential investors to consider mutually beneficial co-operation. He stressed that the stable economic and political situation in the country, as well as the legislative framework and state guarantee are among the main factors that make Turkmenistan increasingly attractive for foreign investors. The participants were shown a detailed overview of the achievements of the oil and gas industry of Turkmenistan and te future plans and projects of the oil and gas sector.

Ambassador of Turkmenistan to the UAE, Serdarmamet Garajayev, noted the importance of the current event for the Turkmen-Emirati relations and expressed confidence that the open door policy of Turkmenistan couple with its neutral status will continue to promote the comprehensive development of international co-operation.

Saeed Al Tayer, representative of the sponsor of the plenary session, and Dragon Oil Board Chairman, welcomed the guests, stressing the productivity of co-operation between the UAE and Turkmenistan in the oil and gas sector and expressed hope for further long-term cooperation, paying special attention to safety.

Ajmal Ahmady, Acting Minister of Industry and Commerce of Afghanistan, dedicated his speech to the significance of the TAPI gas pipeline for Afghanistan’s economic development, noting the Afghan government’s readiness to fulfill its commitments on the project.

Delegates could learn in detail about the construction progress, economic and political impact, advantages and peculiarities of the TAPI gas pipeline from the presentation of Muhammetmyrat Amanov, CEO TAPI Pipeline Ltd, which provided varous statistics about TAPI.

Further information was also presented during a presentation by Rahimberdy Jeparov, Chairman of the State Bank for Foreign Economic Affairs of Turkmenistan. Presenting the summary of economic indicators in Turkmenistan for 2019, the speaker emphasised the country’s wide investment opportunities and openness of the bank to cooperation.

At the end of the plenary session, moderator Ronald Nash, Chairman of the Turkmenistan-UK Trade and Industry Council, drawing attention to the exceptional importance of the peace-loving policy and neutral status of Turkmenistan in the modern world, cited the relationship between Turkmenistan and Afghanistan as an example. The speaker stressed Turkmenistan’s efforts in supporting Afghanistan for political, economic and social stabilisation of the country, noting the provision of humanitarian aid, electricity and the benefits of commissioning the TAPI gas pipeline in the future.

The working sessions of the first day of the international roadshow were devoted to the prospects of development of the gas, chemical and oil refining industry of Turkmenistan, industrialisation, as well as development of the offshore blocks of the Turkmen shelf of the Caspian Sea and attracting of investment.

Managers and leading specialists of the oil and gas sector of both Turkmenistan and foreign companies, including Gas Strategies, Haldor Topsoe, China National Oil and Gas Exploration and Development Corporation, Dragon Oil, WOOD, and Gaffney, Cline & Associates, made comprehensive presentations.

In the afternoon, a round table session titled, “TAPI – the Beacon of Peace and Cooperation”, and a seminar on legal and tax aspects of investing in the oil and gas sector in Turkmenistan were also organised. At the end of the day, delegates from companies such as Siemens LLC, BP, SOCAR AQS, Baker Huges, Technip FMC and others met with the heads of the oil and gas industry of Turkmenistan.

On the second day of the international conference «Oil and Gas of Turkmenistan» dedicated to the 25th anniversary of the Permanent Neutrality of Turkmenistan, two more sessions on investment in the oil and gas industry of Turkmenistan were actively held.

In their speeches, representatives of SC «Turkmengas», TCOR and NaPeCo revealed the potential of co-operation of the Turkmen side with international investors and proposed new solutions to bring Turkmen hydrocarbons to world markets. The final word was given to the advisor to the President of Turkmenistan on oil and gas issues. Summing up the conference, Y. Kakayev noted that more than 300 delegates from 113 companies took part in the conference. He thanked these companies for their interest, the moderators for conducting the sessions, the speakers for their rich presentations full of useful information, and the organisers for the high standard of the forum. At the end of his speech, the advisor invited all participants to the next events, recalling that as part of the celebration of the 25th anniversary of the Permanent Neutrality of Turkmenistan, the next roadshow will be organised in early July in London, and in October, as per tradition, the 25th anniversary international forum will be held in Ashgabat.