Growing up in Plymouth, Massachusetts and later studying at Louisiana State University (LSU) in Baton Rouge, Louisiana, where he pursued a degree in International Affairs, Michael Schena decided to pursue a career that would allow him travel and work. A regular visitor to the countries of Central Asia, Schena, had been able to develop wider co-operation between the United States and the Central Asian countries while also enjoying the culture and traditions on offer. Open Central Asia Magazine took time to find out more and what Schena thinks of future directions in such co-operation. 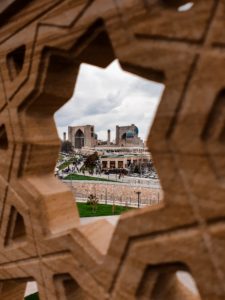 OCA Magazine: What was it that led you to consider pursuing such a career path?

Michael Schena: Two of my Professors who were also mentors suggested I consider looking at the Foreign Service Exam and internships with the State Department. Those Professors were Dr. William Clark, a former Soviet specialist and Dr. Benjamin Martin a European History specialist. While at LSU I had my first major work outside the US experience. I served as an English teacher at a school in Shaoxing, PRC in 2005. As luck would have it I was accepted into a State Department internship program in 2006. From the internship I was hired in 2007 as a Foreign Affairs Officer.

OCA: You have wide experience in working with Central Asian countries. What was your first impression when you came to this region for the first time?

MS: The first my first of many visits to the region was to Kazakhstan, the US Embassy asked me to come out. I was already in the middle of a short-term assignment in Budapest, Hungary, so I had to work with our local staff to try to get a visa from the Kazakh embassy there – that was an interesting experience. From there when my assignment ended in Budapest instead of heading back to the US I got on a flight from Frankfurt to Astana (now Nur-Sultan). I still remember when I landed it was snowing so hard and it looked like the snow was snowing upward from the ground. I remember thinking to myself what have I gotten myself into? It was great experience with lots of accomplishments and was the first of many trips to the region.

OCA: Did you experience a culture shock?

MS: Not much, I am hard to culture shock, I went from living in Massachusetts to living in Louisiana, that’s about as different states as you can get, so Kazakhstan, yes the -40 degrees cold weather was something else but fortunately I bought heavy winter clothing in Budapest and a big fur Ushanka and I was fine in the weather.

OCA: What features did you notice in Uzbekistan that differ from other countries in Central Asia?

MS: Uzbekistan Is definitely much more urban while still holding on to its agrarian economy. Uzbekistan has the most amazing nuts and fruit. The watermelons there were incredible. They are this dark maroon inside and so full of flavour. I have never seen that anywhere else. The Uzbek people are also very approachable, welcoming and warm. If I needed any help with anything someone would always attempt to help even as I struggled through my limited Russian language skills. Literature and culture: I loved the traditional dances I was able to see a few. I also found it absolutely amazing that Samarkand was the centre of so much discovery and learning in the ancient world, from making major progress in Algebra to having one of the first major telescopes. I always heard about these inventions, but rarely are they attributed to Uzbekistan – when people think of this coming from Muslim scholars they think Iraq or the Arabian Peninsula.

MS: My greatest accomplishment with Uzbekistan was the finalisation, approval and signing of the 2010 U.S. – Uzbekistan Science and technology Agreement. Although I no longer work on that portfolio I still see occasional updates about its success. This area, educational exchange, cooperative science and possible commercialisation of science could be an area ripe for development between our countries.

In 2012, I was invited to speak at a trade and foreign investment conference held in Tashkent, and even President Karimov addressed this event as a priority for the country. At that conference, I presented on a program the United States helped establish in Chile, called Start Up Chile where the government gives a grant to entrepreneurs from all over the world to come to Chile and build their business in Chile. I thought this was a good model and could be utilised by the government for a relatively small cost. One problem was that Uzbekistan did not at the time have diplomatic relations with Chile, so I helped connect people from the Uzbek Ministry with counterparts in Chile. That was a second major career high point for me connecting two countries that did not have formal relations to discuss on areas of mutual benefit.

Other areas that will remain important are exports, imports, oil and gas, security, counter terrorism, counter-narcotics, more FDI in the country. More barriers to FDI need to be removed -for example, there is a GM-Daewoo plant in Uzbekistan that can’t keep up with demand just within Uzbekistan, never mind the opportunities of selling throughout Central Asia and the broader CIS countries, but this plant has been unable to expand its operations due to limits on taking cash out of the country to get the supplies needed to expand.

OCA: What priorities do you think The United States could develop more with the Central Asian Countries?

MS: The US needs to find ways to continue to expand co-operation and economic linkages beyond the security sector. Both Uzbekistan and Kyrgyzstan have been vital parts in the War in Afghanistan and are key players in the Northern Distribution Network. The NDN should be utilised going forward as another way to ship goods into and out of the region.

OCA: Based on recent events in the world due to the pandemic, how has your work changed? And what obstacles have you faced?

MS: For me the biggest obstacle is that I am a people person – I do much better work with people in the same room than over video conferencing or endless back and forth e-mails. I believe this will go on for a few more weeks then hopefully I can return to the main building for work.