In 2021 the L.N. Gumilyov ENU celebrates a quarter of a century since its birth.

The young and promising university was founded on 23 May 1996 by merging two well-known universities – Akmola Civil Engineering Institute and Akmola Pedagogical Institute.

The first intake of students amounted no more than 1000 people. The university was in the midst of a historic mission. Today the university provides new priorities for training the professional elite of Kazakhstan society and has consolidated its position as a leading educational and scientific centre, also known abroad.

In 2012 ENU was awarded Best Service Company (Gold Standard). The university was among the top 400 according to the QS World University Rankings. ENU was one of the first Kazakh universities to such international ranking, opening the way for other national universities on the road towards international recognition.
In addition, ENU became the only CIS university in the top 50 developing universities, which opened no longer than half a century ago. According to QS World University Rankings Top 50 Under 50 the L.N. Gumilyov ENU was ranked number 38, ahead of hundreds of universities around the world.

It is pleasing that Kazakhstan’s quality is gaining recognition. Over the decades, the university has been aiming for recognition as one of the top three classical Kazakhstan universities under various versions of national Credit-Rating agencies: IAAR (Independent agency for accreditation and rating) and IQAA (Independent Agency for Quality Assurance in Education). Certainly this is a quality indicator of educational services, science, lecturers’ professionalism and general teamwork. 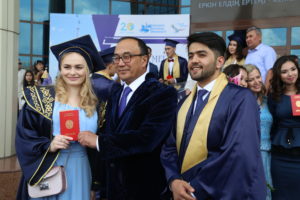 The L.N. Gumilyov ENU sits in the heart of Eurasia and the capital of Kazakhstan. Since its establishment it has attracted the attention of progressive and young people. We are chosen by the owners of state education grants, lapel badge “Altyn Belgi”, winners of republican and international academic competition, children with achievements in sports, culture, and art.

The number of students increases from year to year. Within the last five years alone the amount has grown by 42%. Overall, 20,000 people currently study at ENU. Educational activities are taken in 242 educational areas, and the figures are increasing.

In the framework of the state program “Digital Kazakhstan” experimental education programmes have been developed, among them IT-management, IT auditing, environmental audit, computational linguistics and digital forensics.

Positioning the ENU on the international stage is ensured through the Eurasian Association of Universities, Association of Asian Universities, Turkic Inter-University Union (brings together university of Azerbaijan, Kazakhstan, Kyrgyzstan, Uzbekistan, Turkey and Turkmenistan), UNAI (The United Nations Academic Impact is an initiative that aligns institutions in supporting and contributing to the realization of United Nations goals and mandates).

Major efforts are being undertaking by the Council of chancellors of Kazakh universities and Scientific and Educational Consortium of Belarusian and Kazakh Universities.

The ENU is also a party to the IREG, the Regional Network for Education and Training in Nuclear Technology (STAR-NET), CIS Net-University, SCO University, Turkic Inter-University Union, Scientific and Educational Consortium of Belarusian and Kazakh Universities.

ENU’s international cooperation is based on 400 agreements with universities and research organizations in 50 countries. The Cooperation Framework – academic mobility, internships for masters degree students, joint scientific research, cooperation within Erasmus+ and etc.

Within the framework of academic mobility under bilateral agreements, ENU receives and sends students to and from Europe, USA, Asia and CIS.

An important area for international cooperation has been the establishment of the Cultural Education Centres in Belarus, China, Turkey, Iran. Further Centres are envisaged in India, Romania, South Korea and Lithuania.

On 6 October 2017, the annual ceremony “Springer Nature Awards” were convened by the National Centre of Science and Technology Evaluation, together with international publishing house, Springer, which acknowledged the most published authors and organisations from Kazakhstan and countries of Central Asia. ENU was awarded recognition in the following categories: “Top Springer Organization”, “Top Springer Author”, “Young Scientist Award”.

At the present time 16 scientific journals are published in the L.N. Gumilyov ENU: “Eurasian Mathematical Journal”, “Eurasian Journal of Mathematical and Computer Applications”, “Problems of engineering drawings and vocational education” and “The L.N. Gumilyov ENU’s Herald”, most of whom belong to the list of publications recommended by Ministry of Education and Science of the Republic of Kazakhstan.
Scientist, the winner of “Top Springer Author” Ratbay Myrzakulov, holds the record in Kazakhstan for the number of articles in journals published by one author during a year. The list also includes the names of the dozens of other scientists from the L.N. Gumilyov ENU.
An important indicator of scientific impact is the level of the citation index of publications. For the past five years the average citations of our scientists have represented about 3,05. The rate exceeds the national average by more than 2,5 times.

Significant scientific advances of academic teaching staff are confirmed by the results of competitions for personal awards in the field of science, public scientific grants for young scientists, and those who have made outstanding contributions to science and technology.The union of ENU’s young scientists is “The best Council of Young Scientists”.

L.N. Gumilyov ENU is one of the first Kazakh universities to implement skill enhancement for academic teaching staff in the international arena – in top foreign universities in USA, United Kingdom, Japan and other counties.

There is also the Centre of distance education technologies. In order to make accessible materials and automating the educational process, Moodle was launched, which ensures students’ access to learning and control materials for all type of sessions. A portal of mass open online courses was initiated. This portal and the courses are available on it provide the flexibility in education, learner accessibility and mobility.

The task of the media and information literacy programme of students and lecturers is also in focus. Workshops and trainings on using the resources of the Internet, database presentations and individual consultations are being organised to achieve this task.

Diplomas of L.N. Gumilyov ENU with personal template have been issued since 2019. Currently the university has 20 dissertation councils for awarding PhD.
The university holds first place, by number of publications in journals, with databases run by Thomson Reuters, Web of Science, Scopus and Sci Dire impact-factor.
As part of the transition to research university rank, the scientific school has placed special emphasis on creation the necessary conditions for the science of our staff. This has certainly affected the facilities and resources, providing the necessary base for international scientific co-operation, which formalizes the creation of scientific and educational consortium world research centres and universities. Part of this has entailed opening branch offices of the L.N. Gumilyov ENU in foreign countries. Step by step over the years the university has been granted status of the leading university of the republic and today is proud to put quality mark, guarantees and assurances on its diplomas.

Today a new strategy of the ENU for the following years is being formulated according to education and science state program of the Republic of Kazakhstan.
ENU’s staff have been working on the future development of the university. This is closely related to contemporary realities and future global processes, to stay ahead of the curve. Most importantly our desire is that qualified specialists graduate with a great deal of knowledge that will benefit them throughout life, guide them and point towards the right decisions.