Stephen M. Bland is a freelance journalist, award-winning author, researcher and editor specialising in post-Soviet territories. His book on Central Asia was released in 2016, and he is currently putting the finishing touches to a book about the Caucasus.  www.stephenmbland.com

OCA: Tell us about yourself and your work
SMB: My name is Stephen M. Bland; I’m a freelance journalist, author, researcher and editor specialising in Central Asia and the Caucasus. I first became interested in Central Asia when I visited the region on a whim in 2012. At the time, I was working on a novel based on the history of Laos, but within a few days of arriving in Kyrgyzstan, this project was shelved, and I fell in love with Central Asia. I spent the next three years travelling there as often as I could, the end result of which was my book, Does it Yurt? Travels in Central Asia or How I Came to Love the Stans, a mix of travel, history and reportage exploring the rich heritage, politic landscape and the stories of the people and places of these fascinating lands.

Writing about post-Soviet space, I found there was an appetite for articles on these countries which are often under-represented in the Western media. Back in 2012, Kyrgyzstan was the first former Soviet Republic I visited, now I’ve been to all of them multiple times, penning pieces ranging from history and travel to news stories and investigative reporting on environmental issues, oligarchs and financial crime. It became my niche. Now, in addition to writing about the region, I also research and edit reports on and books by authors from these countries, which can be rewarding in itself.

OCA: What is it that draws you to post-Soviet territories and what are you working on now?
SMB: I find the diversity, the pace of change and the way these nations are looking to forge their identities, which were submerged for so long, fascinating. Lingering spectres from Soviet times continue to clash against the pressures of modernity as each of these unique lands attempts to shape itself in the twenty-first century, often by delving into its past. As the actor Volodymyr Zelenskiy, who played the president in a Ukrainian TV comedy before becoming president of the country in a landslide victory despite having announced no policies said: ‘in post-Soviet countries… everything is possible.’

I’m currently working on a book about the Caucasus, which serves as a prime example. Since the collapse of the USSR, the three traumatised nations and three breakaway republics that make up Transcaucasia have seen three inter-regional wars, at least two – arguably more – dictators, two revolutions, two coup d’états and one civil war. Despite being a small region, the Caucasus are incredibly diverse, and from the culturally Persian desert towns of Southern Azerbaijan to the remote mountain communities of Georgia, local traditions and superstitions remain deeply ingrained. In Baku, for example, people still pray at a shrine dedicated to the purportedly supernatural Mir Mövsüm, a man more commonly known as the “Meat Lord” and said to have been born without bones. In Georgia, meanwhile, as the likely birthplace of wine and the nation with the largest diversity of wine in the world, the tradition of the tamada – the toastmaster at feasts – dates back to time immemorial.

Attitudes to the Soviet-era are also interesting. When officials attempted to remove a statue of “Uncle Joe” from outside the Stalin Museum in his hometown of Gori in 2010, they met with stiff resistance. So, besides its physical manifestations, in certain aspects the USSR continues to endure in hearts and minds.

OCA: What does the Eurasian Creative Guild mean to you?
SMB: At a time when many governments seem intent on exacerbating divisions, the ECG is important as a body bringing together people from across Europe and Asia. It is a space in which to share cultural heritage and expand our understanding. It also serves as a vehicle for making contacts with others working in a broad range of arts, and for that it should be applauded. 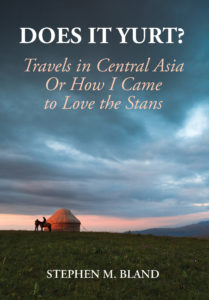