On the 12th of August, on a grey London Wednesday morning we met at King’s Cross station, rushing to get to our seats on time. I was going with a theatre group to film their puppet show from Khorezm at the Edinburgh Fringe Festival as part of my documentary about the Central Asian Theatre Group – Orzu Arts. 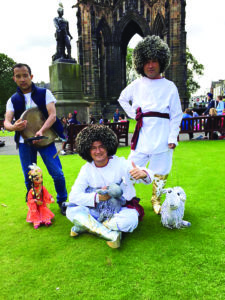 It was surreal to see these people from the ancient land of Khiva sitting next to me in the train to Edinburgh, speaking in Uzbek, exchanging jokes and taking endless pictures on their phones. I was filming them in the train, trying to make links between past and present. Khiva, a city on the Great Silk Road, is the motherland of the famous dance, Lazgi, and also the origin of puppetry arts in Central Asia. Puppetry is one of the oldest performing art forms in Uzbekistan. Puppet performances have been mentioned in the history records of Central Asia from the first century A.D. and were always hugely popular among the people. For a long time the markets of the Central Asian cities hosted shows by puppet masters. Puppet shows of the past were known to be subversive as they parodied the ruling classes and brought forth the issues and wounds of society in a humorous form. Till today, many artists and craftsmen of Uzbekistan have preserved the art of making beautiful, traditional puppets with intricately embroidered national clothes.  The heads of puppets are made out of papier-mâché and are painted in oil, and the clothes are hand stitched from local materials, such as vibrant atlas cloth.

These puppeteers and their wives have been crafting puppets for the past 20 years. They were self-taught and now they are travelling the world, sharing their stories. I tried to picture dedicating my entire life to one vocation and mastering it to perfection. That must take real dedication and passion, not the kind of passion kids on social media exhibit by posting endlessly about their favourite topic at that moment, but a different kind of passion, a real commitment, the kind that swallows you whole, day after day, year after year.

As soon as we arrived in Edinburgh we were swept off our feet by the kaleidoscope of bright colors, characters and sounds. The streets were buzzing with life and excitement. The theatre group changed into their costumes and we distributed leaflets, screaming out joyfully “Puppet show!, as some of our forefathers must have done over the centuries. There was nothing in the world more important than puppets and it was all for them. I felt as though they were alive and had minds and identities and it was the puppets who had come to visit the city. 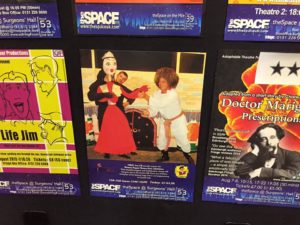 The next day it was show time. I met the group early at 8 am for the rehearsal. During the rehearsal the director was working together with technicians to coordinate and synchronise sound and lighting. As a filmmaker, I am used to the idea that sound design will come in post-production and the only thing I have to do is monitor the sound levels while recording. Being in a theater made me realise the anxiety and intensity of having to do everything live. It had to be perfect and everyone had to be on the same page.

The performances took place at Surgeons Hall on Nicholson Street later that evening. The puppets were a major success with the children. Yuldosh, the Founder and Director of Orzu Arts, had to be the puppets’ personal translator, because the puppets did not speak English and he had to explain what they were up to:

“It’s the wedding anniversary of an old man and old woman and beautiful puppet dancers have come to perform Lazgi. The Lazgi dance originates from a folktale; there lived a king and he had 41 children and the youngest one of all, was the prettiest and his favourite. And that’s why the other wives got very jealous and threw the youngest one off a cliff. That day she was supposed to dance for her king and although she had her bones broken, the strong woman insisted that she still would dance for her king. And this is how Lazgi, the broken dance, was performed for the first time.”

Although the tale is sad, the performances were fun. Yuldosh was making jokes and the puppets were dancing and jumping around. I was surprised to realise that even within the limits of strict coordination and a tight time schedule, the whole group managed to improvise. The show was highly interactive, children were invited on stage to participate and they all loved making chit chat with Yuldosh throughout the show.

When I found out about the existence of Orzu Arts and their performance at the festival, I took it as an opportunity to continue exploring my main interest, Central Asian art, through the medium of documentary film. As Umberto Eco wrote: “to survive we must tell stories”.  I think that stories have the power to transcend cultural boundaries and create a deeper, mutual understanding. The film will screen in December 2015.

More excitingly, perhaps, the puppets and their show are coming to London in November for the Open Central Asia Book Forum and Literature Festival organised by Hertfordshire Press. So don’t miss out!