Large, dense forests, called galleries, riparian forests, extend along the banks of the big and small rivers in the Central Asia. These woods provide shelter and food for many animals, the largest among them being the Bukhara deer of Khangul. 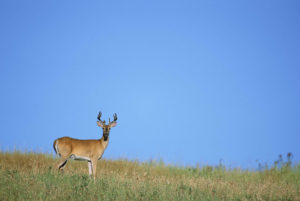 This Tugai deer is endemic to the region, is a subspecies of the red deer and the closest to the ancestral form. In the 19th Century, it lived in the riparian forests across Amu Darya and Syr Darya rivers, in the reeds to the south of the Aral Sea and in the arid salt desert in the north of Kyzyl Kum.

The Turkic name khangul means “imperial flower”. This is a slim and graceful animal with an average height of about 120cm and weight of about 200 kg. Cresting its body is its unparalleled ornament: a powerful set of antlers with five branches placed directly and symmetrically as a sort of crown. These antlers can be 90-110cm long and weigh a hefty 6kg. Antlers start to grow in the second year of life, and ossify within six months, but without branching. For this reason they are called “hairpins” or “matches”. The annual shedding of antlers and regeneration increases the number of branches. The most beautiful crowns are at 7 to 13 years.
In contrast, the hinds do not have antlers, but their marking is alike. Light brown or sandy-grey with smoky-coloured bodies and dark feet that help camouflage the animal in wood thickets. The back of the hips and the underside of the tail are white; this is called a “mirror”. Bordered with a dark stripe, it serves as a “beacon” for the fawns when moving through woods.

Deer are herbivorous animals; they eat more than 30 kinds of plants which they find in the woods and adjacent deserts. Their ability to swim well and cross even large rivers helps them greatly in their search of food or to escape danger. Long, powerful legs allow these animals to take big strides at an easy pace; and if danger threatens, they can jump two metres high and a distance of about 6 metres.

In the autumn, during the rut, stags organize their own tournaments. The winner, having the right to breed, organizes a kind of “harem” of several hind. Pregnancy lasts 34-35 weeks and the fawn are born, one per hind, at the end of spring and beginning of summer. The weight of the fawn is typically 5-6kg and it height is hardly more than half a metre. They have brown fur with yellow-white patches on the sides and a light stripe on the back to hide them perfectly amongst the undergrowth. The fawn spends the first few days lying down, rising only when its mother approaches to suckle it. They grow fast and in a week they follow their mother and a month later they try to eat on their own.

The main enemy of the Bukhara deer till the middle of the last century was the Turan tiger but nowadays it is wolves and feral dogs. The deer is listed in the Red Book of Central Asian countries, but the main causes by which the deer became “rare” and exist “on the verge of extinction” are habitat destruction and hunting by man.

text by Yuriy Chikin,
Candidate of Science in Biology