The problem of distorting general history, a departure from the principle of objectivity in compiling history textbooks, and the lack of holistic basic research on the history of culture and science of Central Asia has long been troubling many historians, scholars, scientists and other representatives of the intellectuals. Scientists and historians of the Central Asian countries, after the acquisition independence, conduct research and publish books that often have a fragmentary or one-sided character. In this regard, there was a need for a new, broad and panoramic view of the general history of science and culture of Central Asia, which during different periods of its long history was part of different empires and large state entities. We needed our own Needham to reveal the history of science and culture of Central Asia to the world.

It is known that the outstanding Cambridge-historian, Joseph Needham (1900-1995), is the author of the stunning seven-volume monograph “Science and Civilisation in China”. The founder of studying of Chinese science in Europe, Needham proceeded from a thesis about universality of science and its continuous progress. The American Professor, Stephen Frederick Starr, came to a similar conclusion about the level and importance of Central Asian science for the world science in the age of Enlightenment.

Oddly enough, this long-awaited book was written not by a historian from the east, but by a U.S. overseas scholar, the President of the Central Asia – Caucasus Research Institute, Stephen Frederick Starr. The monograph by famous orientalist, researcher, and lecturer at the School of Advanced International Studies at Johns Hopkins University, Frederick Starr, titled “Lost Enlightenment: The Golden Age of Central Asia from Arab Conquest till Tamerlane’s Times” has become an event of recent years. This book makes not only Europeans, but also eastern people take a fresh look at our region.

It is remarkable, that the founder and Chairman of the Central Asia-Caucasus Institute was an expert on Russian and Eurasian affairs under the three presidents of the United States. Unfortunately, Central Asia in the eyes of a certain part of western inhabitants to this day is represented as a region of several little-known, poor States at the edge of the world, whose culture is absolutely unremarkable for them. But Stephen Frederick Starr thinks this is notion is wrong, and skilfully dispels the myth of backwardness and marginality of Central Asia. On the basis of extensive research, he colourfully and lovingly describes the Renaissance – the Age of Enlightenment in Central Asia.

This surprisingly rich book tells the story about the rise and crisis of the brightest intellectual and cultural traditions in the Islamic world. Starr proves that the “Muslim Renaissance” – the flowering of philosophy, exact sciences and poetry in the IX-XII centuries, was connected with thousands threads with the territories, which are now called Central Asia: from eastern Iran to western China. But Starr does not simply reveal a broad panorama of political, economic, and cultural processes: he shows how the story is created by personalities like Ibn Siné, Al-Biruni, Al-Ghazali, and many others.
The reader learns from the book, for example, that the scholar and polymath, al-Biruni, discovered America three centuries before Columbus; that Abu Ali ibn Sina’s “Canon of Medicine”, written at the turn of the IX and X centuries, for 600 years was the main textbook on medicine in all educational institutions of the world, including the most famous universities in Europe; that the famous lancet arches entered the European Gothic from Central Asian architecture.

When one 11th-century Arab scholar made a list of all the “praiseworthy people of the epoch” who spoke Arabic, one third of the total number listed – 415 – appeared to be natives of Central Asia. The superiority of Central Asia is most noticeable in the field of natural sciences, philosophy and mathematics – scientists from this region accounted for up to 90% of the total.

Even a cursory glance at the wonderful work of Steve Frederick Starr on the main persons of science, literature and art testifies to the high level of the Epoch of Prosperity – the Era of Enlightenment.
The well-known great scientist Ibn Sina wrote over 400 works, 240 of them came to us in different forms. Ibn Sina’s “Canon of Medical Science” contains compelling arguments about the environmental impact on health, as well as the need for what we today call preventive medicine. He researched methods of treatment of hundreds of diseases, including psychosomatic ones.

The brilliant scholar, Al-Biruni, wrote 180 works. Biruni was one of several Central Asian scholars who spoke out for borrowing the concept of zero and negative numbers from India and paving new avenues for their use.

Several Central Asian scholars fought for primacy in the development of trigonometry and its adoption as an independent field of knowledge. It was rediscovered in Italy only in the 17th century.

In astronomy, the light of science Wasal-Khwarizmi. He and several other astronomers of Central Asia were engaged in measuring the length of the Earth’s degree of Meridian and the development of tables for the construction of horizontal solar clocks, which were precisely adjusted by geographical latitude. He also designed a tool that uses the sine quadrants to obtain numerical solutions to the problems of spherical astronomy. Biruni’s astronomical research has led him to conclude that planetary orbits can be elliptical rather than circular, and the apogee of the Sun changes predictably. Recently, among the planets orbiting other stars in our galaxy, planets with elliptical orbits were discovered, which drastically reduced the number of supposedly inhabited extrasolar planets.

Biruni’s tutor and close friend – Abu Nasr Mansur, is known as the “second after Ptolemy”. Al-Khuzhandi built a large sextant and made some very accurate measurements of the tilt of the ecliptic. Al-Ferghani wrote a treatise on the main medieval astronomical instrument – the astrolabe, which was later widely studied among European readers. He also wrote a study on astronomy, which became the most famous Arab work in Europe in this field. Among his many readers was Christopher Columbus, who lived 600 years after Ferghani.

Some Central Asian scientists have compiled astronomical tables of stunning accuracy. Ulugbek, the ruler of Samarkand, who passionately engaged in astronomy throughout his life, determined the length of the star year better than Copernicus, and measured the inclination of the Earth’s axis so precisely that his calculations are used today.

Al-Khorezmi was the first person who developed the theory of linear and quadratic equations in mathematics. It allowed him to find a key to various arithmetic and geometrical problems. As a result, a book called “Algebra” was published, which defined the name of this field of knowledge, and the term “algorithm” – a distorted form of the name of the scientist. Al-Khorezmi significantly deepened the field of spherical astronomy and did more than anyone else to popularise the decimal system invented in India.

In the sphere of optics a notable contribution was made by Ibn Sahl. He wrote an important treatise on the use of curved mirrors to focus light. Previously, scientists could not solve this problem. In the process, he discovered the law of refraction. Besides Ibn Sina, several other Central Asian scientists created volume works on applied and theoretical medicine. One of them, who studied in Central Asia, Abu Bakr Muhammad ar-Razi, was the most courageous diagnostician and surgeon of the Middle Ages. He was the first to use catgut sutures during operations.

Geography prospered too. Mahmud al-Kashgari created the first map on which Japan was marked. Many astronomers and experts in trigonometry used their skills to determine the latitude and longitude of hundreds of places – from India to the Mediterranean. Without doubt, the greatest geographical achievement of the era was Biruni’s work, where he used astronomical data to prove the existence of an inhabited array of land somewhere between the Atlantic and Pacific oceans.

Rashid ad-Din wrote the world’s first universal history. It would not be an exaggeration to say that Biruni turned out to be the greatest sociologist in the period between Thucydides and present time. For comparison: Hugo Grotius (1583–1645), Thomas Gobbs (1588–1679), Samuel von Pufendorf (1632–1694) and John Locke (1632–1704) preferred to theorise about society rather than study it.Mahmud Kashgari was a turkologist and ethnographer who created comparative linguistics as a field of knowledge.

The pride of Central Asian intellectual life is philosophy. Natives of the region plunged into this area with such passion and eagerness that they considerably bypassed all other scientists of this era. Their writings had a decisive influence both on Muslims all over the world and on the Christian West. The great German scientist, Adam Metz, said that the humanism of the European Renaissance would not have been possible without the early flowering of philosophical research in Central Asia.

The age of Enlightenment is rich with unsurpassed achievements in art and literature. Sufism, a mystical and ecstatic form of Islam that seeks to dispel all worldly problems so that the believer can enter into direct contact with God, was one of the striking examples of popular values that were the driving force of intellectual transformation. The Sufi poets Jalaladdin Rumi and Omar Hayyama have many admirers all over the world today. The early poets Rudaki and Asjadi are at the origin of the great Persian literary tradition. The colossal panorama of Iranian civilisation, the poem “Shahnameh”, set the world standard for other national epics. The author, Ferdowsi, was born in Khorasan, and a large part of his epic describes Central Asia, not the land, which is currently located on the territory of Iran. Almost all scholars, including Ibn Sina, wrote at least part of their works in verse.

Even a superficial and incomplete list of names and accomplishments confirm that the medieval scholars of Central Asia were not mere “transmitters” of ancient Greek achievements, they themselves were pioneers in various fields. Before the Islamic era, Central Asians invented the bow. Due to this invention, which quickly spread throughout China, India and the West, Central Asia can be considered the true birthplace of the violin.

A simple annotation of the contents “The Lost Enlightenment: the Golden Age of Central Asia from the Arab Conquest to the Time of Tamerlane”, even briefly, takes a long time. The monograph of Professor Frederick Starr reveals to readers an amazing Age of Enlightenment, which gave a powerful impetus to the development of world science and culture. And such work with colossal texture could be written only by the person, who was sincerely in love with Central Asia and fascinated by its history. 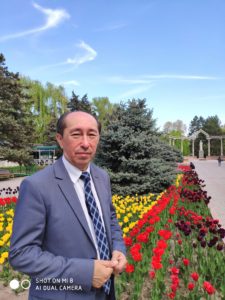 Akhmedov Begizhan Makhmudovich is a writer, historian, member of the National Writers Union of Kyrgyzstan and Prize Laureate of International Funds (Kyrgyzstan) and Babur (Uzbekistan) named after Kurmanjan Datka.