An excerpt from a poem by Anthony Williams 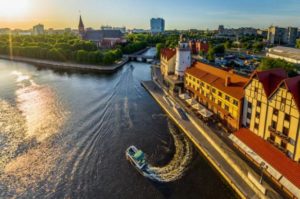 Kaliningrad is a city of contrasts. Unlike any other Russian city, Kaliningrad was built from the ruins of old Prussian capital city of Konigsberg, a citadel on the shores of Baltic sea. Here, Prussian discipline merged with Russian creativity, to create a truly unique architectural image. Old German gothic architecture alternates with new Russian modernism, the spirit of ordnung with the Russian soul, this contrast gave a huge impulse to a fast development of the city.

Walking through the old quaint streets, you feel like the heroine of a good medieval fairy tale. The main thing is to notice are the details and enjoy the beauty. Kaliningrad is called the amber capital of Russia, few cities can boast of such a favour of nature! The Amber Room is a small World Wonder, but your Kaliningrad grandmother could have amber pictures all around her flat’s walls. More than 80 percent of the world’s sunstone reserves are concentrated here.

Kaliningrad is a welcoming jewel of the Baltic, a city first built by the Teutons to battle Lithuanian romuvans, later a home of Friedrich I, the first king of Prussia, Emmanuel Kant, the great philosopher and the site of some of the bloodiest battles of the 20th century – during East Prussia Offensive, the Red Army stormed an impenetrable stronghold of Konigsberg. Kaliningrad truly has a lot to offer for any visitor: great architectural wonders – a castle, various churches, houses, fountains, and different museums.

This city personally sets me up for a philosophical view, perhaps because one of the greatest philosophical minds, Emmanuel Kant, lived and worked here. Thanks to Kant, namely his grave, the main attraction of the city survived – the Cathedral of the 13th century! If you are ever lucky enough to visit this Cathedral, you will be able to feel the spirit of the old Konigsberg from the time of the great philosopher and feel the mysterious breath of that time. Königsberg Cathedral is built in a brick Gothic-style with a magnificent pipe organ, the largest in Europe.

The land of Kaliningrad gave birth to many talented people, among them many poets, and many more came here in search of its unique spirit. Some famous names include Simon Dach, Kristijonas Donelaitis, Ernst Theodor Wilhelm Hoffmann, Simkin Sam Haimovich, and Ziborov Eugen Alexandrovich.

Kaliningrad, the most western and European city of Russia ,this year will become the centre of poetic life of Eurasia. The Eurasian Creative Guild (London), giving due note to the city’s long and bright history, the beauty of its buildings and its unique atmosphere merging the two cultures – Russian and European – has decided to host its first Eurasian Poetic Festival in Kaliningrad.

The Ministry of Culture and Tourism of the Kaliningrad oblast, a co-organiser of this event, notes that the Eurasian Poetic Festival will fit right in to the city that easily mixes old and new, German and Russian, East and West, and will play a key part in uniting poets from all over Eurasia.

Welcome to Kaliningrad – a place of contrasts, rich history and good people!