There are the dates in every country, which people love, respect and remember and honour. One such date is the formation of the Kazakh Khanate, which occurred 550 years ago. This event served as a great impetus for the development of Kazakh ethnicity and identity. And, of course, half a century later Kazakhs preserve the memory of it. At the initiative of the President of Kazakhstan, Nursultan Nazarbayev, a festival has been held as a tribute to the Kazakh Khanate. 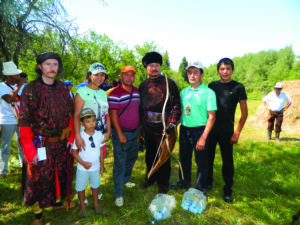 The aims of the festival were the promotion of national cultural traditions and spiritual-moral values of Kazakh people. It invoked interest in ethnic music, national games and the development of patriotism among the Kazakhs. The festival was held outdoors in the mountains, the “Huns”, located a 30-minute drive from Almaty from the 25th to 27th July.

The first day of the festival opened with a parade of participants followed by lunch in a large yurt-like structure with a shanyrak (the upper dome-like portion of a yurt). After lunch participants could learn pottery, pick up Kazakh national instruments: dombra, kobyz, adyrna, jetygen, etc., and even try to speak in the ancient Turkic language. The yurt was decorated inside with amazing handmade carpets (shyrdak), pillows, wolf skins, leather bags, vests, shields and other heritage of the Kazakh people. This part of festival was called “Khan Tengri”.

Visitors were also offered the opportunity to enjoy ethnic music by the “Alan” group, consisting of young Kazakh boys, playing the dombra in both modern and traditional melodies. The festival was not without foreign musicians – the “Kaya” group, who came from the distant Altai mountains played. It is hardly a secret that the Kazakhs, Kyrgyz and Altai have common roots, which explains their cultural similarities in music, cuisine, language and even appearance despite the great distance between these peoples.

After spending the night in a yurt as a very real Kazakh, guests were in a good mood, despite the rainy weather. The exhibition continued with master classes on making felt, jewellery, wood, leather and trying on the Kazakh traditional clothes.

During the festive dinner, guests enjoyed the music of the Great Steppe. Neo-Ethno-Folk group “Arkaiym”, blended traditional instruments and sounds, with modern beats that attracted a wider audience to the origins of these modern performances.

The performance of an extraordinary artist, shaman Hogavat Tobet Kam, is also worth noting with his exhilarating soundscapes, mesmerising imitations of wolf howling and thunder sounds in his performance, which created a mystical atmosphere.

After the musical part all the attention of the audience was transferred to horse-racing games. There were competitions in “Atpen Audyraspak”, “Tenge Ilu”, “Kyz Kuu” and “Kok par” national games. However, the most exciting games were “Kok par” and “Kyz Kuu”.

Kok par” involves two teams. Before the game, a goat carcass is put in a circle, which is drawn in the centre of the arena. The aim is for each team to raise it from the ground and take it into their own net. Needless to say, all of this must be done on horseback. The winner is the team that does this the most times and on this occasion the first placed prize of 150 thousand tenge went to the team from Kazakhstan.

“Kyz Kuu” is another national game, which literally means “catch a girl”. In the first half of the game, a boy pursues a girl, and if he is lucky, he kisses her. In the second half, they change places and the girl seeks to catch up with her partner. If she does this, she beats him with a whip. First place was awarded to a player from the Almaty region, Valikhanova Aidariya.