Dance is an integral part of life in Central Asia; it can be seen both in rural settings and on the proscenium stage, from highly developed virtuosic classical styles to nuanced and subtle folk-dance forms. Western audiences might be surprised to learn that Central Asia has an ancient and classical music and dance tradition, like ballet: Shashmaqam (meaning the ‘sixth maqam’ in Persian). This classical tradition was patronised in the multi-ethnic royal courts of Bukhara and Samarkand by the emirs, much like ballet was patronized in the French court of King Louis XIV. Dance is more than just recreational movement and sound: it acts as a barometer of the cultural and social health of a community. It is also a facilitator in many important cultural functions such as rites of passage and seasonal celebrations. The performing arts are elevated to the status of ‘record keeper’, generating unique cultural messages and act as a living link to environments inside the minds and hearts of people, throughout time and space.

As a foreigner who has been passionately researching, studying, practicing, seeking out and performing traditional and ethno-contemporary dance forms from the region of Central Asia for nearly two decades, I often hear the phrase ‘it is in your blood’, following my performances or after a social dance gathering. Audience members often say ‘you must have some “Uzbek, Tajik, Afghan, Uyghur or Persian” blood in you to be able to dance the way you do!’ Although, the statement is made with the intention of being a compliment, it also sheds light on the way our society devalues dance and dancers as skilled and disciplined working practitioners. The reality is that behind every presentation of dance, as in any other form of art, exists hours of thoughtful intention, creation, discipline, practice and dedication. Not everyone may appreciate all of the arts; some people enjoy only music or fine arts, others may enjoy literature, poetry or dance. But one thing we can all appreciate is the thorough craftsmanship behind any artform.

It is certainly true that some people are born with natural talents or propensities towards given practices. For example, interpreting music, sculpting clay, crafting sentences, or moving with seamless grace. But when a naturally talented artist couples their abilities with deliberate and sustained practice the results are undeniably noticeable.

One example of this includes one of my dance teachers, Zaragol Iskandarova, a revered and iconic dancer who came from the Pamir Mountains of Badakhshan, Tajikistan. When asked about dance, she said she ‘would become sick without 2 or more hours of dance practice per day’. Another example of this type of artistic discipline comes from the famed doira master Abbos Kosimov from Tashkent, Uzbekistan. When I performed in Abbos’ jubilee concert this February 2020, I sat in on 5 to 8 hour rehearsals with him and his musicians. He mentioned in a rehearsal one day that he would practice alone 6-7 hours a day as a young doira artist. Abbos is a virtuoso of the doira and his artistic work habit and dedication, in the form of daily practice, remains unwavering today. I myself, a second-generation dancer, have practiced a minimum of 2 hours a day daily for decades and during periods of creation for new productions rehearsals can go from 5-9 hours a day. Countless examples of this dedicated work ethic in the performing arts include respected living dance artists such as Mamura Ergasheva, Qodir Momenov, Farohat Saidova, Malika Kalondarova, Dilafruz Jabarova, Narziddin Shermatov, Zeynab Farzada, and so many others. This is by no means an exhaustive list, but the nuanced work of these master artists is clearly reflected in the hours and decades of practice that they have invested into their art making.

Why then is dance as an art form often marginalised and not appreciated as an intellectual act, requiring great discipline and intentionality? As humans we do not possess a disembodied consciousness, free from our physical bodies. We are living, moving creatures with embedded intelligence that extends throughout our entire bodies. The fundamental perception of the body being inferior to the brain is an age-old prejudice which, has deeply affected how we view our bodies. This mind-body disconnect also contributes to societal stigmas surrounding dance as an art form, as the canvas of the dancer’s body is used to create art. How we view our bodies in relationship to our brains affects how we think about ourselves and also how we think about thinking itself.

Neuroscientist Antonio Damassio clearly elucidates this ancient “mind-body problem” through his proven research, explaining that our bodies can instinctually sense emotion and external threats five to ten times faster than the conscious brain can perceive. Our bodies are always communicating with us, even before our brains realise what is going on. But how should this research affect our perception of the dancer? By paying attention to our bodies, acknowledging movement as an intellectual act and normalizing taking care of the health of our bodies, we can help transform our view of dance. From a purely innate social activity to a high art requiring rigorous dedication, physical force, emotion and intellect.

There is a large disparity between how dance is used for art, propaganda and cultural events and the actual treatment of working dance artists. I believe we can change our thinking by giving greater respect and education to our respective performed heritages. In this era of heightened xenophobia, it is crucial to reveal intersecting points in our shared histories, to help remove the fear of ‘otherness.’ If dance practitioners are not recognised as actors of intangible heritage,
vital pieces of our humanity and collective history will be lost. When dance forms like those of Central Asia remain unseen and marginalised, we in turn are deprived of vital pieces of cultural inheritance.

Clichés associating contemporary, innovative and progressive attributes with the West, versus traditional, stagnant and nationalistic qualities with the East, limit opportunities for an artist’s individual expression and self-definition. Some might be surprised to know that some of the most celebrated contemporary dance artists and choreographic minds of the 20th century have origins from Central Asia and Caucasia. For example, Robert Joffery of the famed Joffery Ballet Company is a choreographer of half-Afghan parentage, George Balanchine, the Founder
and Director of the New York City Ballet, was of Georgian parentage, the ballet virtuoso Rudolf Nureyev was of Tartar heritage, and ballet superstar Tamara Toumanova was of Armenian-Georgian parentage.

Inspiration for one of the most controversial and famed ballets, the ‘Rite of Spring’ by Vaslav Nijinsky, drew inspiration from ethnographic sketches of dancers from the Central Asian steppe and paintings by Nicholas Roerich. Nijinsky mined for the avant-garde in the antiquity of Central Asian dance imagery, regalia and imaged movement vocabulary to produce this iconic choreography, which was restaged by dance choreographer Pina Bausch, one of the most celebrated contemporary choreographers in the world.

Is the work of iconic dance artists purely in their blood or is it in their labouring bodies? Much sweat, blood and creative thought was devoted to roduce these masterpieces, which are recognized and performed around the world today. As Dr. Kealinohomoku writes in her article
“An Anthropologist Looks at Ballet as a Form of Ethnic Dance”: “The ethnicity of ballet is revealed also in the kinds of flora and fauna which appear regularly. Horses and swans are esteemed fauna…..” 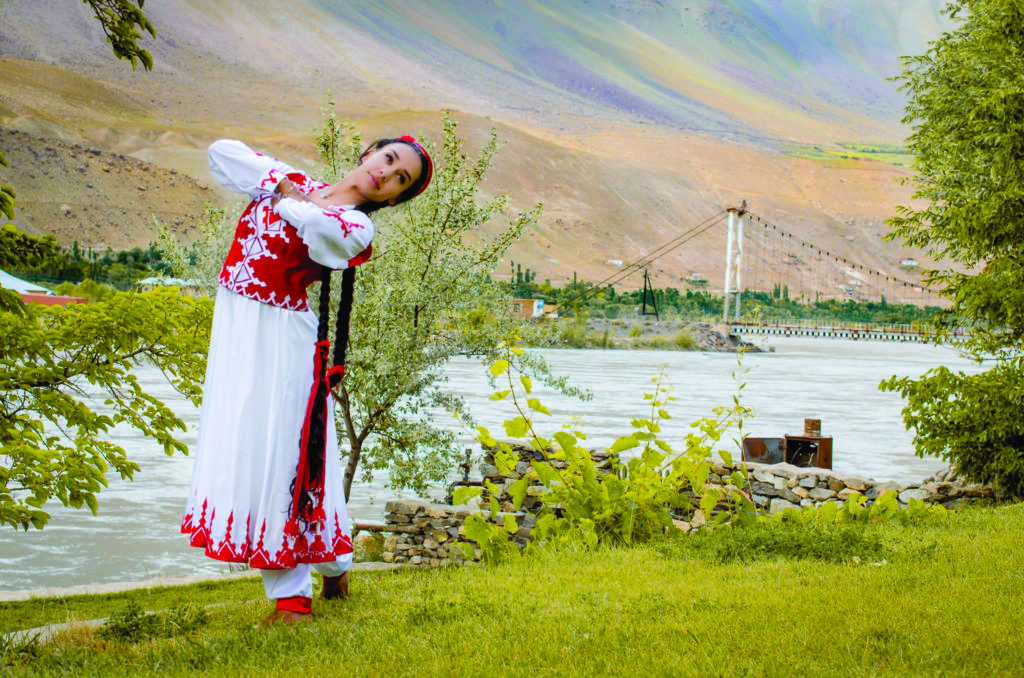 In contrast, animals native to Central Asia are pantomimed in Central Asian dance forms reflecting creatures such as the jerboa, the bulbul, crows and snakes. Kealinohomoku continues: “In ballet, grains, roses, and lilies are suitable flora, but we would not likely find much call for taro, yams, coconuts, acorns, or squash blossoms.” The comparable flora to Central Asia, might include poppies, tulips and staple food items such as grapes, apples, osh (pilov) and non. Kealinohomoku adds: “economic pursuits are reflected in the roles played in ballet such as spinners, foresters, soldiers, even factory workers, sailors, and filling station attendants. However, we would not expect to find pottery makers, canoe builders, grain pounders, llama herders, giraffe stalkers, or slash and burn agriculturists! The question is not whether ballet reflects its own heritage. The question is why we seem to need to believe that ballet has somehow become acultural. Why are we afraid to call it an ethnic form?”

I invite you, particularly communities of the Central Asian diaspora, to examine the lenses we use to filter the stories and histories we are told about performing artists. The spectrum through which our world dance heritage has been communicated, both on the world stage and in the field of academia, must be rebalanced and expanded. It starts with you – how will you contribute to a renewed perception and reorientation of your own enduring culture and it’s performed heritage?

Support dance artists and keep in mind the next time you watch an ephemeral art form, the hours of sweat that were shed to create these fleeting moments of nuanced beauty.